It is the first time a performing arts organisation has achieved the designation, opening opportunities to investigate issues of importance to the sector. 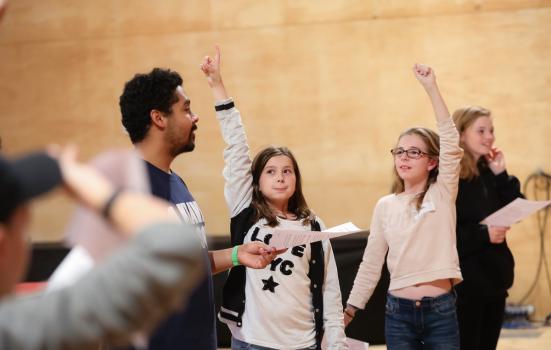 RSC's research will consider the impact of Shakespeare on today's youth
Photo:

The Royal Shakespeare Company (RSC) has become an Independent Research Organisation, the first performing arts organisation to achieve the status.

Usually the purview of universities, the title means RSC can bid for research grants to further its teaching activities and expand recent research into digital performance.

Three associate scholars have been appointed to lead the work: Professors James Shapiro, Emma Smith and Ayanna Thompson, who will establish and chair a dedicated research board by year's end.

"The performing arts sector itself hasn't been able to bid for independently or lead research into areas that are crucial to our development... [it] hasn't been represented around the research table before," O'Hanlon said.

"We know that performing arts organisations are really good at bringing audiences together to have conversations about what's going on today - and that's really what research does.

"The exciting thing is to define what does an Independent Research Organisation (IRO) as a performing arts organisation look like?"

The Arts and Humanities Research Council (AHRC), which awarded the status, said it will allow RSC to fully explore questions about society and culture it has asked on stage for the past 50 years.

"[It] will help all of us to imagine an exciting future for the performing arts, and shape a more dynamic, resilient and inclusive cultural ecosystem," Executive Chair Professor Christopher Smith said.

RSC plans to start with its network of regional theatres before involving other research partners, potentially including Arts Council England.

As the first performing arts organisation with IRO status, there is "no template" for how to proceed, O'Hanlon says.

"We're not a university, we're not a museum, we're not an art gallery. We will need to articulate a different research agenda for ourselves."

RSC first pursued the accreditation pre-pandemic, and it has taken nearly two years to meet requirements around oversight, ethics and governance. It now needs to successfully bid for funding to activate its IRO status.

It hopes that artist-led and informed research will produce innovative and unexpected outcomes.

Priorities for exploration include analysing the impact of Shakespeare and placemaking work, tracking what works in inclusive arts practice, and building on Audience of the Future, its collaborative virtual reality project.

"It's both about how we're furthering Shakespeare studies but also taking on research that can really develop the needs of the whole sector," O'Hanlon added.

"We'll be a different kind of IRO as our work is already rooted in research based practice."

Another of the company's research priorities includes updating its archives to reflect various histories.

"That kind of academic influence and spirit has always been part of how the RSC works but this [status] formalises that and gives us an academic anchor."

"It's both about how we're furthering Shakespeare studies but also taking on research that can really develop the needs of the whole sector."