Review calls for more arts involvement in the built environment

The contribution that the cultural sector can make to the planning, design and animation of the public realm and architecture should be reinforced, according to an independent review commissioned by the Culture Minister. 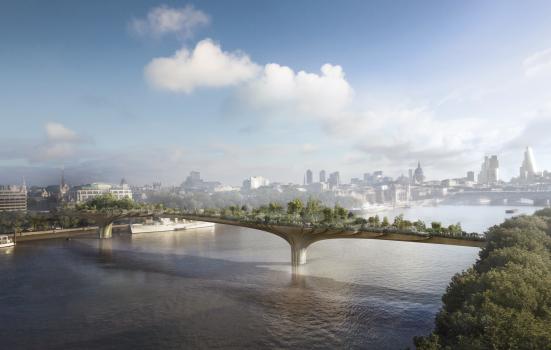 Proposals for achieving a step-change in the way that the future built environment is planned and designed are starting to be implemented following the conclusion of the Farrell Review of Architecture and the Built Environment (FAR). The independent Review, commissioned by Culture Minister Ed Vaizey and led by architect Sir Terry Farrell, sought contributions from government, institutions, agencies, the cultural and creative industries and the public. The report, published earlier this year, included more than 60 recommendations for improving the built environment, grouped under five themes that relate to education and skills, design quality, economic benefits, policy and cultural heritage.

Although few participants from the arts sector were involved in the review and most of the wide-ranging proposals are aimed at architects, planners and government, the role of artists and the arts is highlighted. The report calls upon Arts Council England (ACE) and the Crafts Council to research and reinforce the contribution that the cultural sector can make to the planning, design and animation of the public realm and architecture, describing the arts and artists as “well placed to creatively engage individuals and communities and give voice to their sense of place, their concerns, and their aspirations for the areas they live, work and play in.”

Mhora Samuel, Director of the Theatres Trust, which was involved in the consultation, told AP: “Initially culture was only framed within the terms of reference under ‘Cultural Heritage’ so it was good to see the recommendation relating to the Arts Council England and the Crafts Council… I have found that widening appreciation of the quality of the built environment leads to people taking a greater civic responsibility for their surroundings, and the arts – and theatres - play a huge role in this… The passion and interest shown by audiences and the public when a theatre building is being redeveloped, or when it lies neglected or is under threat is witness to this.” Another participant in the consultation was Jonathan Banks, Chief Executive of the public art think tank ixia, who is urging the public art sector to participate in the review's continuing development and implementation, particularly in relation to the recommendation that local planning authorities should “follow examples of best practice, where wider contextual plans and appropriate funding for landscape and public art are required from developers.” He described this recommendation as “particularly useful in progressing the provision of public art via the planning system in relation to the Government's inclusion of cultural wellbeing and public art within national planning policies and guidance.”

The Crafts Council has welcomed the Farrell Review’s acknowledgement of the contribution of artists and makers to successful built environments. Rosy Greenlees, Executive Director of the Crafts Council, explained: “There are a number of makers already working on wide-ranging architectural, public-realm, urban regeneration and built environment projects for both public and private commissions. Our 2010 research Making Value showed that makers can work with built environment sector by both providing an in-depth, tacit knowledge of the material world and specific material qualities and by their understanding of how people relate to material qualities and objects, both emotionally and in a functional sense… The expertise of the maker can also be used to explore notions of ‘place’ and local identity.”

Robert Powell, Director of the public art agency Beam, who was a member of the FAR advisory panel, described the Review as “the most important gathering of serious thinking on the built environment and place-making since the Urban Task Force led by Lord Rogers in 1998.” He told AP: “There’s great potential for public and outdoor artists, and those interested in what the arts can be in the public realm, to add to the Farrell initiative, and to encourage the Arts Council to review and renew its interest and support in this field.” Beam is organising a national seminar in November, to explore ideas on how to create new momentum around the arts and the public realm. ACE, which also contributed to the Review, is committed to progressing the recommendations and has been participating in discussions around their implementation. A spokesperson said: “We are interested in talking to partners about how the recommendation – that the role of artists and the arts in contributing to the planning, design and animation of our public realm and architecture – can be realised, building on our activity to date, and we will take part in the event.”

Meanwhile, a House of Lords debate on the Farrell Review prompted a motion to form a new Built Environment Select Committee whose remit would be to monitor the implementation of the FAR recommendations. The Government has confirmed that discussions are still taking place across departments, but as yet there is no official response to the Review.