A research project that toured an Indian play around Lincolnshire has uncovered challenges around staging and touring diverse arts in rural areas. 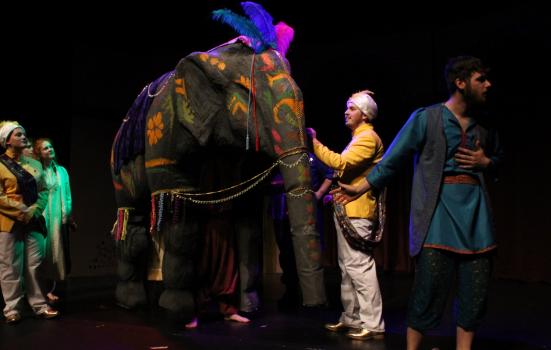 A performance of 'Charandas Chor: the Honest Thief'
Photo:

White and retired audiences in rural areas will happily go and see diverse work – and wish there was more of it – but more support is needed to create and tour it, new research has concluded.

They are calling for new funding to address the lack of cultural diversity in rural arts, to support both the arts infrastructure and the creation of new work.

The researchers uncovered a series of challenges to staging diverse work in rural areas, including an overwhelming white demographic; lack of current funding; difficulties in receiving national media attention; and lack of good transport links. But they conclude diverse work can reach people “who would not usually watch theatre”.

Noting a lack of familiarity with artistic works makes “the decision to part with one’s money very difficult”, they stress the importance of venues and arts organisations consistently offering diverse work.

Most diverse work is performed in urban areas and the researchers found travelling between rural venues can be expensive and time consuming, which can put performers off.

“I’m optimistic about the future because for the first time we have exposed the challenges facing diverse arts in rural areas,” said Madhavan. “The research is a first step, but we do believe there could be changes because there’s now appetite.”

The report calls for new funding streams to address the lack of cultural diversity in rural arts. Nair told AP this money should be focused both at arts centres and creatives, to support the development of the infrastructure, and to create it in the first place.

“Unless you support the individual artist, you cannot build anything new,” he added.

The report also recommends bringing performances to village halls or non-traditional venues, encouraging partnerships between urban-based and rural-based arts organisations, and producing a “different kind of thinking” about how work should be hosted rurally.

Nair stressed the demographics outside of urban centres are changing and becoming increasingly multicultural, increasing the potential for more diverse arts.

Although the researchers stressed the ‘admirable’ nature of Arts Council England’s (ACE) current diversity policy, including the Creative Case for Diversity, they warn expecting too much from smaller National Portfolio Organisations (NPOs) may have negative consequences.

The report relays comments by the General Manager at Louth Riverhead, an NPO which receives an annual £37k grant from ACE, who said it is hard to achieve diversity objectives with “few volunteers and limited ticket sales”.

“It’s too early to say if Creative Case is failing rural areas,” Madhaven said. “But there is the potential it will fail if it does not address challenges facing rural communities.”