The first wave of festival cancellations is the canary in the coal mine as Culture Minister Caroline Dinenage says insurance is "still on the table". 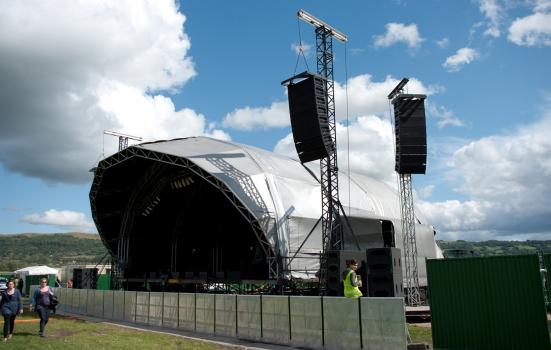 Greenbelt Festival, pictured, has been cancelled for the second year in a row
Photo:

One quarter of 2021 festivals with more than 5,000 attendees have been cancelled, heralding further failures if financial security cannot be found quickly.

Festivals planned for July and August will incur "substantial, non-refundable costs by the end of May," according to the Association of Independent Festivals (AIF).

Three quarters of this year’s events are scheduled to take place in July and August, and could “very quickly disappear from the calendar”, AIF says, unless the Government steps in with a financial a safety net.

Having previously rejected calls for an insurance scheme, Culture Minister Caroline Dinenage is reported to have told festival organisers at the pilot event in Liverpool's Sefton Park last weekend that insurance was "still on the table".

However, any scheme is in the hands of the Treasury: "If we can do it, we'd like to", Dinenage said.

AIF has issued a "red alert", warning now is the last chance to save the remainder of the 2021 festival season and protect the long-term survival of the supply chain.

72% of AIF members say if their festivals do not take place in 2021, they will need financial support to return in 2022.

Major festivals have already pulled the plug. Boomtown Fair, an immersive five-day theatrical music festival near Winchester, has been postponed for a second time.

A £992,000 Culture Recovery Fund (CRF) award threw the event “a vital and necessary lifeline,” organisers said. But they pointed out that funding represented less than 10% of the festival's costs and pressing ahead now would be "a huge gamble".

Brighton Pride has reversed a decision taken in February to go ahead this year, citing "many uncertainties" that made it impossible to plan the festival. These include the absence of Government-backed Covid insurance and safety concerns related to “significant supply chain challenges including infrastructure, security and staffing”.

It’s a similar story at Greenbelt Festival, which is also being cancelled for the second year running. Creative Director Paul Northup said insurance would have cost much less than the revenue lost from cancelled summer festivals.

“But it seems that our case has fallen, if not on deaf ears, then on ears more attuned to the clamour of other sectors," he said.

The Scottish Government is being challenged over imposing a two-metre distancing rule for events and a 2000-person limit on ourdoor events at the final level of its Covid protection framework .

Organisers have cancelled Rewind Scotland, though England-based events in Macclesfield and Henley-on-Thames remain on the calendar for now.

In Wales, which has no roadmap for restarting events, the Ceredigion National Eisteddfod has fallen victim to Covid uncertainty and been postponed for a year.

Sam Foulkes, Managing Director of Rock the Park in Wrexham, has challenged First Minister Mark Drakeford to provide more certainty. The festival is due to run August 6 to 8, but the decision to postpone will not be considered until June.

Some organisers have changed event dates to later in the year to minimise the likelihood of needing to cancel.

22% of festivals tracked by AIF are now taking place in September or October – a shift from 10%, according to analysis earlier in the year.

As a result, pressure on the festival supply chain is building up during the autumn, making it difficult for any more events to reschedule.

Other festivals are planning to go ahead with a lower capacity and more flexible programming. Towersey Festival, awarded £104,000 from the CRF, is preparing to run Pint-Sized Towersey at the end of August. A predominantly outdoor event, it will have significantly reduced audience numbers and can be socially distanced if required.

A covered workshop space with open sides will have room for at least 400 participants, campsite pitches will be spaced two metres apart and there will be three times as many toilets as usual - one for every 25 attendees.

AIF CEO Paul Reed is hopeful Covid restrictions will end as planned: “It is hugely positive that there was a festival pilot as part of the Events Research Programme last weekend, and this could be an important milestone in the safe return of festivals.”

But he warned: “If Government-backed insurance is off the table, festival organisers deserve to know what Government proposes as an alternative to prevent the widespread collapse of the festival season.”

Promoters have no protection if a Covid-related issue leads to their festival being cancelled. Industry figures have been raising the danger of this with Government since January.

While commercial insurers are prepared to put suitable products in place, the risk is too great for them to underwrite.

Support for some form of insurance has been growing. In Parliament, the Covid Recovery Group of 42 lockdown-sceptic MPs is also calling for action. Its Chair, former Chief Whip Mark Harper, has called for £250m of support for reopening: “The live events industry does not require another lump sum from the Covid Recovery Fund... it requires insurance."

Members of LIVE, a federation of music industry associations, have also written to the Prime Minister demanding action.

They are calling on Government to use £400m unallocated cash from the £1.9bn Covid Recovery Fund to underwrite a contingency scheme that will cover a proportion of an organiser’s costs if they are forced to cancel.

They argue this would be an efficient use of public money: if events take place as planned, money would be unclaimed ready to underwrite further economic activity - and tax receipts for the Government.

No response has been received yet.