Camelot reports highest ever Lottery money going to good causes, but less than a quarter of ticket revenues now go to charitable activities. 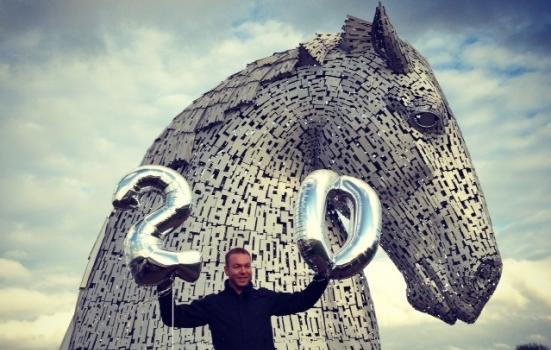 Sir Chris Hoy celebrates 20 years of the National Lottery in front of the Kelpies, a Lottery-funded artwork.

National Lottery ticket sales have bounced back to deliver an all-time record amount to the arts, sport, heritage and the Big Lottery fund in 2014/15. The benefit to the arts last year was 20% of the total £1.796bn shared between the Lottery Good Causes. However, although this represents a £45m increase on the previous year, this increase was only 2.6% – significantly less than the 8.1% increase in total ticket sales, which also hit an all-time high.

Following a brief dip in 2013/14, Lottery ticket sales grew to £7.277bn last year – up £564m on the previous year. Lottery operator Camelot’s best-ever performance was partly driven by improving sales of its flagship Lotto game, which, after a decade of decline and a re-launch with a higher-priced minimum stake of £2, has started to grow again. But its marketing efforts were strongest around instant play. 70 new Scratchcards and online Instant Win games were launched, and the roll-out of 10,000 standalone terminals to satisfy “untapped demand” for Scratchcards was completed. As a result, instant play games accounted for 86% of the total increase in sales last year.

Such a move potentially spells bad news for the arts, which receive smaller percentages from instant play than from Lotto. The average proportion of ticket receipts returned to good causes averaged 28% until 2012/13, but the swing in the balance of sales away from draw tickets to instant play games means that this has now fallen to just 24.6%. The percentage of ticket revenues that go to good causes has never been set by government, but Camelot reveals that the main Lotto draw is configured to return just over 31% to the four charitable causes. It does not release details of the percentage returns to good causes from its instant games, but the latest figures show that it is a significantly smaller proportion.