The City of London has nixed the beleaguered project in favour of a "major renewal" of the Barbican Centre instead. 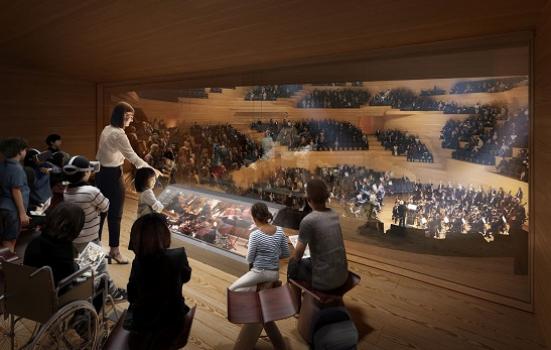 An artist's interpretation of one of the centre's planned 'education hubs'

Plans for a new concert hall for London have been scrapped following five years of funding difficulties.

The City of London says the 2000-seat Centre for Music "will not be progressed", instead announcing a "major renewal" of the Barbican Centre - one of the project's former partners. It could not say how much this would cost.

It will consider alternative proposals for the centre's site, currently occupied by the Museum of London, but has not committed to a replacement cultural facility.

Billed as the "Tate Modern for music", the four-storey Centre for Music would have included a restaurant and commercial office spaces for hire, as well as spaces for education work and public events.

Having confirmed a new grant for the London Symphony Orchestra (LSO) and two years' funding for its Culture Mile, the City said such investment in existing cultural assets "will maintain and enhance its commitment to creativity and culture".

A letter from the centre's partners, The Barbican, LSO and Guildhall School of Music and Drama, thanked those who had supported its development.

"While we are naturally disappointed, we fully understand the City’s decision as it is clearly very difficult to advance a project such as this at this time."

The City says its decision was due to "the current unprecendented circumstances", but declined to elaborate when asked if it meant the pandemic or ongoing funding difficulties.

The City of London has already spent £2.43m developing the Centre for Music and another £2.74m on design plans surrounding its proposed site.

It pursued masterplanning last year knowing it would need to privately fundraise £125m and secure income from commercial tenants.

The Government had decided in 2016 that the centre "did not offer value for money for taxpayers and is not affordable" - and that was before inflation pushed the construction costs up £10m.

By this time, Arts Council England had spent £1.25m on a business plan, returning the rest of its £5.5m budget to the Exchequer.

In March 2020, a spokesperson for the Centre of Music team told ArtsProfessional they were "confident" about raising money from the private sector, and that early conversations had been "encouraging".

The City will take "a phased approach" to redeveloping the Barbican starting in 2022.

While a budget is yet to be approved, the City says plans to "reimagine and upgrade" the 40-year-old, Grade-II listed complex will meet the "changing needs of modern audiences, visitors, performers and artists", be environmentally sustainable, and allow for new creative learning programmes.

Managind Director Sir Nicholas Kenyon said: "This will make the Barbican the creative home for the next generation."

A competition for the project's architects will be launched later this year.

The funding for the Culture Mile will help the area to transition to a sustainable business model, the City says.

No one living in this part of London wanted it anyway. There so many more important uses of money and space at the moment. It just goes to show how out of touch the cultural elite are with reality.