Two-thirds of England’s National Portfolio Organisations achieved growth in revenues from trading and philanthropy between 2011 and 2014, with the National Theatre leading the charge. 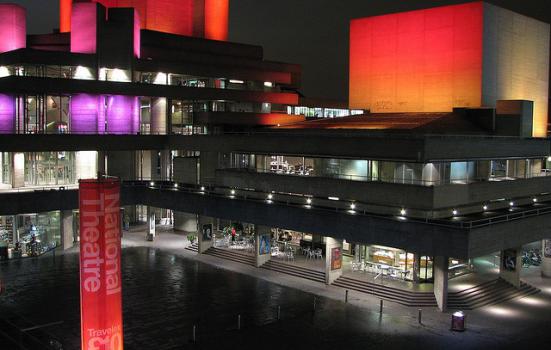 The National Theatre (NT) has become England’s most successful subsidised arts organisation at diversifying its income streams, according to the latest figures released by Arts Council England (ACE). It was one of 375 National Portfolio Organisations (NPOs) to grow their private income streams between 2011/12 and 2013/14, leading the sector to benefit from £126.6m of additional income.

The NT’s turnover increased by £30m over the three years, of which £21.7m came from tickets and related sales and a further £9m from ‘contributed’ income, including a £6.3m increase in philanthropic donations. As a result of its commercial and fundraising success, the NT shared the distinction of having the highest turnover of any of ACE’s regularly funded clients with the Royal Opera House, both of which declared an income of around £116m.

The NT is one of ACE’s flagship institutions and, as a member of its National Portfolio, received £17.5m a year in regular funding for the 2012-15 ACE funding period. ACE has now reduced this to £17.2m a year for the 2015-18 funding period – a level of investment that, when challenged, ACE Chief Executive Darren Henley described himself as “very comfortable with”.

A like-for-like comparison of the fortunes of each NPO over the three years from 2011/12 to 2013/14 has been made possible by the release of the latest tranche of ‘Annual Submission data’, which ACE collects each year from all of its regularly funded clients and makes public 18 months after the year-end. 579 organisations received regular funding for all three years and their income figures provide a snapshot of the extent to which England’s NPOs as a whole were able to offset the loss of public sector funding during that period.

Whilst the NT was the most successful at developing its commercial income streams, it was not the only one. Glyndebourne Touring Opera and Glyndebourne Education saw a jump of £20.8m during that period, while the Royal Opera House and Royal Shakespeare Company saw their private incomes grow by £6.8m and £17.1m respectively. But for other organisations, growth in private income over this period was more modest, or in some cases it fell. The Southbank Centre and English National Opera each saw increases of less than £1.5m – less than Sadler’s Wells (£3.5m) and the Roundhouse (£3.1m).

Across the portfolio as a whole, private income grew at 375 of the 579 organisations but fell at the rest. Earned income from core trading activities was the most successful source of new revenues, bringing an additional £85.6m. Philanthropy made a significant contribution too, with donations growing by £23.4m and a further £9.4m from trusts and foundations, though sponsorship fell by £1.8m. Whilst £13m was lost to NPOs from public sector sources, including local authorities, this was more than compensated for by a £22m increase from ACE subsidy, including Grants for the Arts and strategic funding. 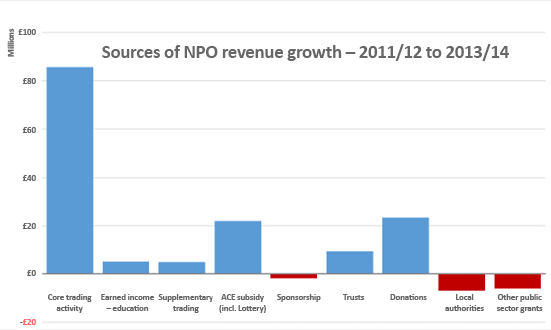