Up to two thirds of UK orchestras are already working in health and social care settings. With NHS support, they could be "at the heart of society’s recovery from the mental and economic scars of Covid-19". 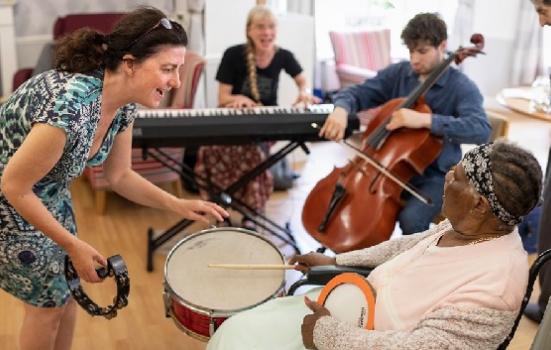 Orchestras, opera companies and choirs contribute more than £1.6m to the UK's public health sector a year, research has found.

The 'Orchestras in Healthcare' report says orchestras could play a bigger role in health and social care settings as we emerge from the pandemic.

Much of orchestras existing activity in healthcare is self-funded and lacks NHS involvement, leading the report to suggest better social prescribing infrastructure could "put orchestras and musicians at the heart of society’s recovery from the mental and economic scars of Covid-19".

Published by the Association of British Orchestras (ABO), City of London Sinfonia and Orchestras Live, 'Orchestras in Healthcare' considers orchestras' public health work in the year to March 2020.

Most of the remaining third said they would like to or already have plans to do so in future.

There are big geographical gaps in orchestras work in specialist hospitals.

The report says that there is no such work in acute and chronic hospital settings, mental health or social care settings in the North East and South East.

By contrast, devolved health services in Scotland and North West England have participatory music activities spread across most health and social care settings.

They are also the only parts of the country where orchestras have formal links to existing NHS social prescribing programmes.

Royal Liverpool Philharmonic Orchestra has a longstanding partnership with Mersey Care NHS Foundation Trust. The orchestra’s music and mental health programme has engaged about 12,000 adults since it was established in 2008.

Informal links to social prescribing programmes are more common, with 19% of respondents reporting these compared to just 9% for formal links.

In the area of social care, Bournemouth Symphony Orchestra and the Bristol Drugs Project created the Bristol Recovery Orchestra in 2019 to offer “creative expression and social interaction” to recovering addicts.

Sarah Derbyshire, Chief Executive of Orchestras Live, said the report demonstrates "the extent and ambition of orchestras and musicians working in health and social care".

It could, she added, be "the launchpad for developing policy and practice within the orchestral profession" around social prescribing.

The report says there is "a clear business case for orchestras engaging in this activity".

"Funders are increasingly focusing on arts, health and wellbeing, and this area is an opportunity for many orchestras to access new income."

James Sanderson, Chief Executive of the National Academy of Social Prescribing, welcomes the report and the opportunity to raise awareness of the positive impact orchestras working in healthcare can make.

“I encourage our partners to embrace this as a catalyst to connect across the worlds of health and care and music, to help people to live better, healthier and happier lives.”