Movie scores and video game soundtracks are broadening the genre's appeal, attracting a new generation of fans who are more likely to donate. 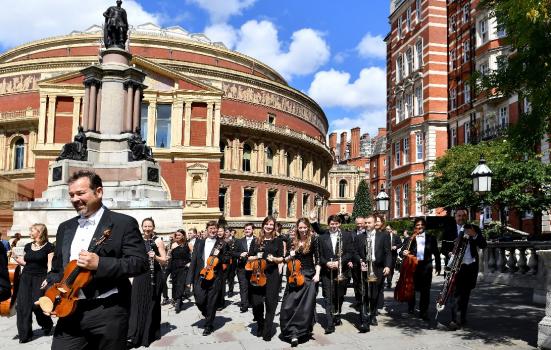 Orchestral and classical music's popularity grew during lockdown, a trend that appears set to continue, according to new research.

Surveys of 8,000 households commissioned by the Royal Philharmonic Orchestra (RPO) between March and November 2020 found interest in orchestral and classical music grew from 35% to 59%.

The RPO, like many other orchestras, experienced a spike in interest online during spring. Website visitor numbers grew by 290% and the ensemble fielded a 755% increase in social media engagement.

As the country emerged from lockdown in the summer, the orchestra said it wanted to know whether changing attitudes towards orchestral music were "a momentary reaction or whether something more substantial and sustained was shaping consumer views on music".

It found 85% of people used the time in lockdown to broaden their cultural horizons, with a third of these wanting to learn more about orchestral, opera and chamber music. One in six respondents said they would continue exploring the music they discovered during lockdown.

Continued interest was highest among young people. Just under a quarter said they would keep up their lockdown listening habits, while a fifth said they would continue to watch concerts online.

This growth was highest among under-35s, where one in four showed interest in learning more about the genre.

The under-35 age group was also more likely - three times as likely as over-55s - to donate to arts organisations affected by the lockdown.

The growing association of orchestral music with everyday tasks  may go some way towards explaining rising interest in the genre during lockdown.

By the start of 2020, people were as already as likely to listen to orchestral music while doing the housework as they were to visit a concert hall.

During lockdown, people set out to learn more about the genre through online and television documentaries (22%), reading (20%) and podcasts (19%). 17% watched performances, interviews or broadcasts relating to orchestral music via social media.

Huw Davies, Deputy Managing Director of the RPO, said: "The groundwork done over the previous years to reconnect new audiences with the genre meant it was there to help more people during the challenging pandemic months when it mattered most."

More people listening to orchestral music doesn't necessarily mean more concert-goers: in summer, nearly half (48%) of people said it would be at least six months before they attended an in-person event.

Safety overtook price as the top concern for potential concert attendees for the first time in 2020.

Even when safety measures such as social distancing, reduced capacity and hand santiser stations were in place, 15% of people still would not attend. The RPO's surveys did not ask about mandatory masks.

Less than a third of respondents (29%) said the vaccine made them feel comfortable attending concerts again.