The art market is “struggling to convert hesitant buyers into repeat customers”, but Instagram is offering a key marketing channel, a new report suggests. 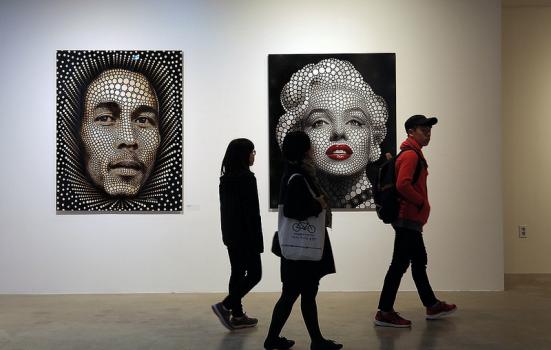 The percentage of art buyers making online purchases has fallen in the past year, and the growth of online art sales has slowed for the second year running, a new report has found.

The findings may cause concern for artists who make a living selling art online, although overall, the online art market has continued to grow.

The survey also found that mobile purchases have continued to increase and take a larger share of the market, and social media remains a key way for people to find new art.

“The future of the online market is guaranteed, although the shape remains a mystery,” writes Robert Read, Head of Art and Private Clients at Hiscox, the insurance company behind the report.

He continues: “Buying art continues to be hugely enjoyable and exciting (as well as occasionally frustrating) and the continued influence of social media, especially Instagram, helps fuel the growth of the market.”

The report’s findings, which also assess the impact of cryptocurrencies and cybercrime, are based on responses from 831 art buyers surveyed through Art Tactic’s client mailing list.

According to the report, this suggests that the art market is “struggling to convert hesitant, as well as occasional online buyers, into repeat customers”.

63% of survey respondents said that Instagram, which had 800 million monthly active users as of January 2018 and is expected to break through 1 billion active users by the end of 2018, was their platform of choice for finding art.

90% of new art buyers said that price transparency was a key attribute when deciding which online art sales to buy from, making this a potential obstacle to increasing sales.

The report also finds over half of surveyed selling platforms had been the target of attempted cyber attacks over the past 12 months. Around 15% said that an attack had been successful.

Just over 40% of online art buyers are either concerned or very concerned about cyber crime when buying art online, and 82% said they would most likely buy from platforms they had prior knowledge of due to fear of cybercrime.

Read concludes: “The art market is dominated by small- and medium-sized businesses who have historically been at the less tech-savvy, more complacent end of the scale.

“These businesses are vulnerable and our findings suggest that cyber criminals may be waking up to this, perhaps seeing the art market as a soft target.”