End of an era for England’s arts funding as ACE drops additionality requirements and prepares to support core funded organisations from both Lottery and grant in aid revenues. 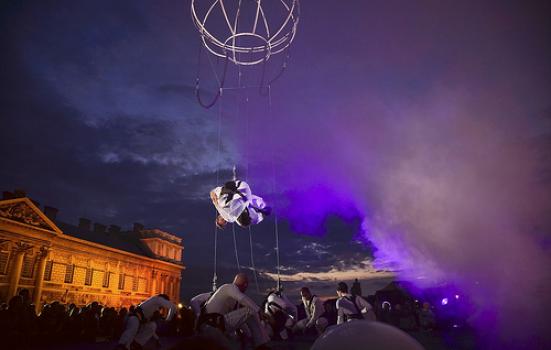 Greenwich + Docklands International Festival: Festival NPOs are among those most likely to be funded from Lottery-only sources.
Photo:

Arts Council England (ACE) will soon be deciding which of its core funded National Portfolio Organisations (NPOs) will receive Grant in Aid (GIA) funding and which will be funded wholly through the Lottery for the period 2015-18. In 2015/16 the value of funding for NPOs will total £331m, of which 18% (£60m) will come from the Lottery. No criteria will be published to indicate which organisations will be Lottery-only funded and the funding source for each NPO will only be determined when ACE has drawn up a list of NPOs and the value of their grants. There will be no separate application process, no need for the Lottery-funded NPOs to demonstrate any more additionality than the GIA funded NPOs, and ACE will make no distinction between the two in the way that they are treated or ACE’s requirements of them. An ACE spokesperson told AP: “We will make fair and transparent decisions as to which organisations will be funded from National Lottery funds. The criteria could be based on the type of organisation, or what it does. For example organisations which focus on (say) festival activity, touring companies, or community arts… We will clarify our criteria before we make decisions...”

The announcement of the new scheme for ACE’s core funded organisations follows a round of briefing meetings for current NPOs in November last year. Organisations were warned of the likelihood of such a move and delegates raised questions about its legality, given that National Lottery distribution laws require Lottery proceeds to be distributed in response to open applications and the cash to be used for time-limited activities which are ‘additional’ to those normally or currently funded directly from Government. But ACE is confident that it could meet any legal challenge on the issue of ‘additionality’. In a statement, Alan Davey told AP: “There has been an on-going debate since the Lottery came into being as to what the additionality principle is and how to test whether any proposed funding might breach the principle. We have listened to the current debate and we are confident that the approach we’re taking does not breach the additionality principle. The biggest proportion of our portfolio funding will still come from grant in aid. In using Lottery funds to support additional activity we believe that we adhere to the principle that Government funding should be maintained and is an essential part of a mixed funding model.”

ACE first paid its NPOs from Lottery funds for the three-year funding period 2012-15, during which time touring organisations were quietly allocated 20% of their grants from there. The total value of those awards was £54m, but the announcement now of £60m a year of Lottery money for core funding reveals ACE’s intention for this to become a route for making good after recent cuts in central Government funding. AP asked ACE about its contingency plans for possible shortfalls in Lottery revenues, but no plans are in place for a scenario under which Lottery revenues fall and no additional reserves are being put aside for this eventuality. A spokesperson said: “The DCMS has forecasted Lottery income of £263m in 2015/16, £264m in 2016/17 and £265m in 2017/18. We do not anticipate that our actual Lottery income would fall so far short of these predictions that our investment of Lottery funding into the National portfolio would be affected…. We manage the balance of Lottery funding effectively in order to protect against possible fluctuations, and we are confident that we have been prudent in the amount we have allocated to the portfolio.”

Other funding streams that will be paid out of Lottery revenues have been announced at the same time as the NPO scheme. The long-standing Grants for the Arts scheme, to which £70m is being allocated, will continue to provide project funding but will not be widely available to NPOs - only to current NPOs whose applications to the new scheme are turned down, or to NPOs involved in an artist- or partnership-led applications. £127m will be earmarked for strategic funding, including touring activity within England and for cross-border touring between England and the other countries of the UK. It will also support audience development activity and initiatives such as Unlimited commissions and Hull's year as UK Capital of Culture in 2017.