Nottingham unveils roadmap to ‘reimagine the city’ with culture

As Nottingham submits its bid to become European Capital of Culture in 2023, a city-wide plan to integrate culture into education and healthcare has been published. 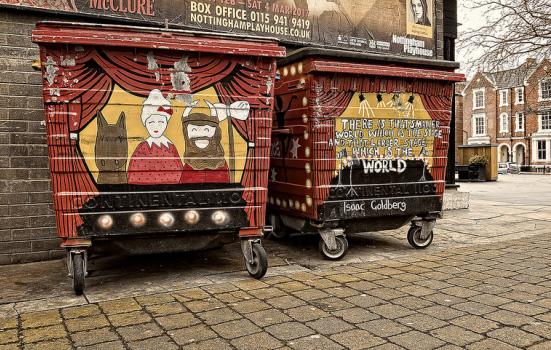 Nottingham has committed to embedding culture in education and healthcare as part of an ambitious ten-year vision for the city.

By 2027, the city aims to make “culturally-inspired lifelong learning” available for every person in Nottingham, and establish cultural programmes, research and partnerships that enhance health and wellbeing.

The vision, set to be adopted by the Council’s Executive Board today, also aims to achieve national and international acclaim for the quality and diversity of locally-produced artistic work.

“Culture will unlock potential in our city. The next ten years will continue to see a transition that takes the city from its industrial, manufacturing past, paving the way to reimagine the city for generations to come,” the document’s foreword reads.

“Exploring a bid to be the European Capital of Culture in 2023 will be one of the options that formalises our action plan, in order to deliver our ambitions and objectives.”

Produced by the City Council, in partnership with a range of cultural organisations including Dance4, New Art Exchange, and Nottingham Playhouse, the ‘Cultural Statement and Framework’ document signals a commitment to quality, education, place, economy, health and wellbeing in the city.

It contains an “active suite of resources” to help local stakeholders increase the recognition and impact of Nottingham’s cultural sector and attract and retain talented individuals.

Plans include supporting schools to develop a world-class cultural learning offer and giving every person opportunities to access creative skills and careers, although details about specific interventions have not been released.

The City Council also aims to work in partnership with public health professionals and local commissioning groups to understand and enhance the health and wellbeing of the city’s residents.

Adrienne Kelly, Business and Strategy Officer at Nottingham City Council, told AP there is currently no extra funding identified for delivering these aims and any interventions will “have to find funding to get delivered”.

The city announced its bid for the European Capital of Culture 2023 title in August.

Kelly said success in the competition would hopefully lead to inward investment that could be used to deliver the Framework’s ambitions.

“We will use the process of bidding for European Capital of Culture, from the decision year to 2023 and beyond, to rebalance cultural capital across the city and invest in creativity and talent wherever we find it,” she said.

“We will use the European Capital of Culture year to show how culture can bring us together in all our diversity, extend our empathy and broaden our horizons and work together to introduce radical change that leaves no-one behind.”

Nottingham joins Leeds, Dundee and Milton Keynes in bidding for the award, which the Government committed to remaining part of despite uncertainty surrounding the UK’s withdrawal from the European Union.