A campaign to reduce proposed funding cuts has succeeded but organisations will still lose thousands of pounds. 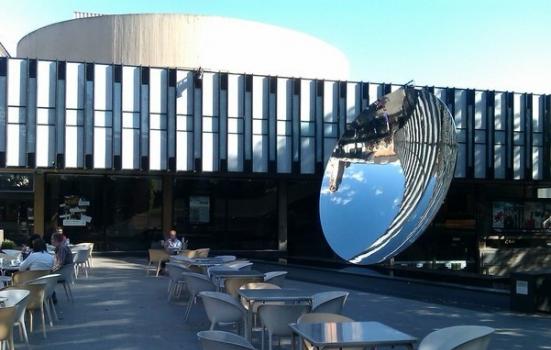 Nottingham Playhouse has thanked the council for agreeing to its proposal
Photo:

Arts organisations in Nottingham have convinced their local authority to reduce planned cuts to their grants from 37% to 15%.

Nottingham City Council had proposed to decrease funding for five local organisations - Nottingham Playhouse, Nottingham Contemporary, New Art Exchange, City Arts and Nottingham UNESCO City of Literature - by £107,000 per year to about £176,000 in 2021/22.

But in announcing its annual budget last week, the council took the "unusual step" of amending its own proposal, Leader David Mellen said.

"The arts are important... it's really important that we try to minimise the cuts to their valuable work."

However, the 15% cut means organisations must find about £42,500 next year if they are to make up the funding shortfall.

Councillor Dave Trimble, the portfolio holder for culture, said Nottingham, like many other local authorities, had to "look at reducing some of our contributions to outside organisations" to balance its books.

"It is also important to be clear that the city council remains the only local authority which funds the Nottingham Playhouse, despite theatre-goers coming from across the county and wider area."

"We do not underestimate the enormous pressure that local authorities are under."

City of Literature also thanked the council for reducing the "inevitable" funding cut.

"Your continued investment and support will allow us to play our part in the recovery of our city, building a better world with words."

The five organisations suggested a 15% funding cut as a counter offer after the council contacted them about the 37% plan.

Talks between the parties included possible alternative sources of funding outside of ongoing council investment.

None of the organisations approached by ArtsProfessional in recent weeks responded to requests for comment.

The Nottingham Project, a board charged with delivering a 10-year cultural rejuvenation of the city, said it worked with the affected venues and council to "help bridge the gap these cuts will cause".

A statement from the board in late February opposed the proposed 37% cut: "We believe this cuts of this level will jeopardise the ability of the cultural sector to play its part in the recovery of our city from Covid-19."

'Now is not the time'

Public Campaign for the Arts, a 75,000-person network established in response to the pandemic, threw its weight behind the affected organisations.

Spokesperson Jack Gamble said Nottingham City Council had done "absolutely the right thing by consulting people" on the cuts, giving the campaign the opportunity to influence the policy change.

More than 3,650 campaign members engaged with the council's consultation. Altogether, two thirds of submissions on the council's budget related to arts and culture, the campaign said.

It said it understood the current pressure on local authority budgets but noted research shows that, on average, councils have cut their culture budgets by a third since 2010.

"This is not the time for more big cuts."

Gamble added: "This action in Nottingham is the first local action we've been able to take as a campaign.

"Now we have got this network of supporters across the UK, we can keep abreast of political developments."