A new paper exploring the connections and economic linkages between publicly funded culture and the creative industries has been published by Arts Council England. Prepared by John Holden, Head of Culture at Demos, the reports publication coincides with an ongoing investigation into creativity through the DCMS/DTI Creative Economy Programme, which aims to produce the first Government assessment of the state of the UK creative economy and the creative industries within it.
w: http://www.artscouncil.org.uk/publications/publications.php

Tate Modern has launched Your Tate Track, a competition for 1624 year olds to create music inspired by art from the Tate Collection. Entrants can visit Tate Online to choose an art work that will be on display at Tate Modern in the autumn, and then write a music track in response. The winning track will be installed in the gallery on a listening post next to the work which inspired it and will be streamed on Tates website. The competition is the culmination of a 12-month project, Tate Tracks, involving leading musicians including Klaxons and the Chemical Brothers. The public have until 31 August to vote for their favourite track.
w: http://www.myspace.com/tategallery 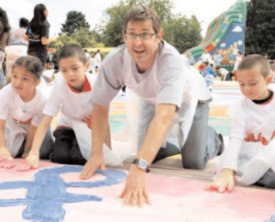 The largest finger painting in the world was created at the Brent Respect Festival in July, aided by documentary film-maker and Brent resident, Louis Theroux. Around 650 mainly young participants took part in the enormous painting, using up 270 litres of paint in the process. The Guinness Book of World Records has confirmed that the 16,400 square foot finger painting completed on Sunday is the new record holder and has beaten the 12,593 square foot record that was held in Spain. Theroux said of the record, This is going straight to the top of my CV.

English Heritage has launched its Buildings at Risk Register 2007 identifying, amongst other theatre buildings, Wiltons Music Hall, Tower Hamlets, Alexandra Palace, Haringey, and the Winter Gardens, Morecambe. The Theatres Trust has meanwhile voiced its concern over the lack of awareness of the risks facing historic theatres in England through demolition, lack of funding and redevelopment.
w: http://www.english-heritage.org.uk

Queens Park Arts Centre in Aylesbury has secured the option to purchase the freehold of the building from which it operates, from Buckinghamshire County Council, for £325,000. The organisation can buy its building at any point in time up to 2016, thought the price will rise in line with inflation if the transaction is not completed by 2009. A parallel deal has been struck to give the Centre a 10-year secure lease, which will have major benefits in allowing applications for large-scale grants.

The National Student Drama Festival (NSDF), in conjunction with The Pleasance Theatre, Edinburgh, is running a competition throughout the Edinburgh Festival Fringe 2007 to find new work by UK students. Three NSDF Selectors will see every student première at the Edinburgh Festival Fringe for free including all devised work, new student writing, and British première performed by students. The winning show will be offered a one-week transfer to The Pleasance Theatre, Islington, in September. NSDF will contribute up to £1,000 to assist with costs.
w: http://www.nsdf.org.uk

The Charity Commission for England and Wales has launched its redesigned website, which aims to make it easier for charities to meet their obligations to the regulator. New features include an new Google-based search tool and a simpler structure, making the Commissions advice and guidance more accessible. Theres also secure online service allowing charities to update their details in near-real time, and a facility to allow a first annual return to be completed online.
w: http://www.charity-commission.gov.uk

The Adam Reynolds Bursary, designed for the direct benefit of mid-career disabled or deaf artists, is to be launched by artist Yinka Shonibare at a special event at Camden Arts Centre in August. The bursary has been organised by the disability arts organisation Shape, with friends and family of the late artist Adam Reynolds. The bursary of £5,000 will be aligned to a residency at a different significant arts space every year, and in its inaugural year, will be part of the programme at Camden Arts Centre.
w: http://www.camdenartscentre.org