A survey in Scotland has found that people who engage in culture are more likely to report good health and life satisfaction than those who do not. 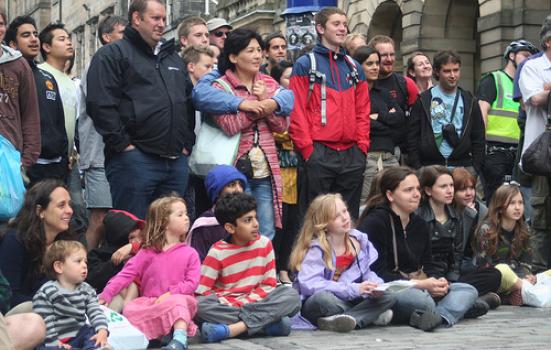 From the youngest ages being exposed to cultural activities has an impact on cognitive development
Photo:

Participation in culture is significantly associated with good health and high life satisfaction in Scotland, according to the latest research. A detailed study by Scottish Government analysts of the impact on health of both culture and sport, based on data from the Scottish Household Survey 2011, confirms for the first time that participating in culture or attending cultural places or events has a positive impact on the nation’s health and life satisfaction. The report, Healthy Attendance: The Impact of Cultural Engagement and Sports Participation on Health and Satisfaction with life in Scotland 2013, identifies a positive link with wellbeing even when other factors including age, economic status, income, area deprivation, education qualification, disability or long standing illness and smoking are accounted for.

The research was commissioned after a report based on the 2010 Scottish Household Survey revealed that people who are encouraged to participate in cultural activity as children are more likely to continue to do so into adulthood. It also builds on evidence from a longitudinal study, ‘Growing Up in Scotland’, which shows that from the youngest ages, being exposed to cultural activities, has an impact on cognitive development. Culture Secretary Fiona Hyslop said: “This Government is committed to promoting and supporting cultural activities because we recognise and value the potential benefits not only to individuals but also to our communities. Cumulatively, this growing evidence base is giving us more insight into the benefits that taking part in cultural and creative activities brings – at every life stage.” Mark O'Neill, Director of Policy & Research, Glasgow Life, commented: “This is a really ground-breaking piece of work for Scotland – and for the UK. It demonstrates, for the first time, a clear association between cultural attendance and improved health and wellbeing. It strengthens the case for cultural participation being included in any assessment of life satisfaction – and in any holistic public health strategy.”