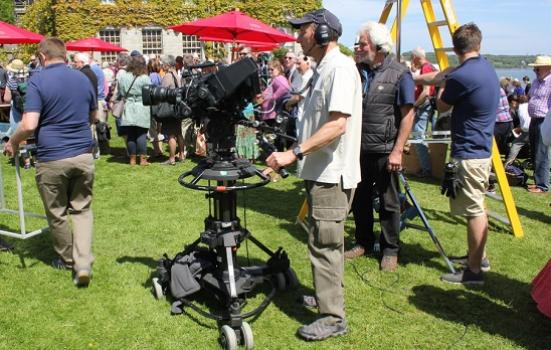 A new body has been established to “champion the creative industries in Wales” and provide “a strong and unified voice for the sector”.

Creative Wales was launched by Deputy Culture Minister Dafydd Elis-Thomas last week. Organisations will be able to apply to two primary funding streams – a revenue fund for grants of £10,000 to £200,000 and a capital fund with awards from £50,000 to £1.5m. Guidance on this and further funds, such as a small grants digital development fund, is expected in April.

Visit Wales’ Head of Programmes Gerwyn Evans has been appointed Deputy Director in charge of a team of 19. Creative Wales’ new website says this number will double “when we are fully up and running”. Its Director is Jason Thomas, Wales’ Director of Culture, Tourism and Sport, and an advisory board of industry experts will help the organisation develop programmes to support and grow the country’s film, television, music, publishing, digital and gaming sectors.

The website says: “We will drive growth across the whole of the nation and plan targeted regional activity. Our initial focus will be on three key sub-sectors: film and TV, digital and gaming, and music. For each of these sectors we will develop a comprehensive action plan with key stakeholders. We will seek to promote each sector internationally, providing opportunities for key companies to build their global profile.

“All our sectors have a role to play in promoting Wales to the world – not only as a centre for creative excellence, but also as a great place to visit, live and work. Together they tell the story of a country rich in culture, creativity and community.”

Evans told ArtsProfessional that Creative Wales differs from the Arts Council of Wales in that its remit is to develop the creative industries, rather than the arts: “There’s a lot of alignment, specifically around the music agenda.”

However, no area of creativity is out of bounds for funding and support – one of Creative Wales’ positions will focus on ‘emerging sectors’ like fashion and photography. Evans said his team will take a “two-track approach”: developing skills and capacity at a grassroots level while growing ‘brand Wales’ to attract international investment.

The new organisation was an example of “Welsh Government showing their commitment to the creative industries in Wales,” he said.

It has been established as a “discrete function” within Welsh Government and sits within the Government portfolio of Culture, Tourism and Sport. Evans described it as “almost an internal agency approach”.

“We have a bit more flexibility to act more commercially than some other parts of the Welsh Government.

“It’s not to say the Welsh government did nothing with the creative industries … it’s a new, ultra-effective way to support [them].”

Not at arms length

The idea of establishing Creative Wales as separate body that would offer more streamlined and flexible services to the creative industries was first floated in 2016, according to a document outlining its priorities and vision.

However in the document Elis-Thomas said “I am not convinced that an arms length body is required”.

“Instead we have established Creative Wales as an internal agency based on the similar models …   of Cadw and Visit Wales, where working within government has not hampered their ability to succeed in their respective fields. Being part of Government means that Creative Wales can lever its position for best possible effect.”

Creative Wales “will not proactively cover all subsectors equally”, the document continues. It will initially concentrate on digital platforms by developing its growing film, television and post-production industries, and improving pathways for “viable careers in the music industry”.

Support for the creative industries in recent years has focussed on the sub-sectors considered most likely to generate economic growth, especially high-end television.

“However, recent industry growth has changed the landscape considerably and the sector is at a tipping point where opportunities and challenges are converging,” the document states.

“This signals a need for a change of direction for the future, one which embraces the synergies between the economy, culture and talent, is truly cross-sectoral and focuses more on supporting growth from a grass-roots level up.”

Creative Wales is now seeking a Board Chair and non-executive Board Members who will help deliver “a substantial programme of change”.

Candidates must have extensive experience in the commercial creative industries in Wales as well as knowledge of the public sector landscape. They must also demonstrate “in-depth insight into the issues facing the Welsh creative industries and ideas for growing the sector”.

The body aims to have at least three Welsh speakers on the board.