The decision follows years of protest and the termination of similar relationships at two major Dutch galleries. 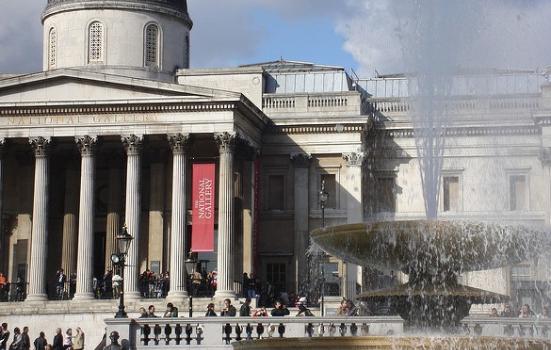 The decision follows sustained protest at the gallery, including a fake PR presentation promoting oil industry ‘artwashing’ and a silent ‘meeting for worship’ to highlight alleged human rights abuses by Shell.

And it adds to a growing trend for cultural institutions across Europe and North America to sever their relationships with oil giants, with two major Dutch museums also dropping Shell as a sponsor earlier this year.

Campaigners Culture Unstained discovered that the corporate relationship with the National Gallery had been terminated via emails obtained under Freedom of Information (FOI) laws.

In one email, Shell informed the gallery it would not be renewing its corporate membership, which expired at the end of January 2018, to “focus on STEM (science, technology, engineering and maths) education programmes”.

The information also reveals that the gallery was long aware of the risks of partnering with Shell, having been provided with over 100 pieces of negative media coverage on the company through a due diligence report - sorted into areas including the environment, corruption, fraud issues and human rights.

Chris Garrard, Co-director of Culture Unstained, denounced the gallery’s decision to continue its partnership with the oil company for years despite the “clear ethical case” against doing do.

Commenting on the case, a National Gallery spokesperson said all fundraising decisions are made according to an ethical fundraising policy, available on the gallery’s website. They added: “Like many museums, the gallery develops partnerships with businesses from a variety of sectors.

“Shell supported the National Gallery from 2006 until 2018, both as a Sponsor and a Corporate Member.”

Clara Paillard, President of the PCS Union Culture Group, said the organisation was “delighted” to hear that Shell’s partnership had come to a close, pointing to a recent IPCC report on the urgency of tackling climate change. “Fossil fuel companies have got no place in our public museums and should become persona non grata like tobacco companies,” she said. “We and the 4,000 cultural workers we represent want nothing to do with them!”

The move follows decisions by other European cultural institutions to discontinue partnerships with Shell. In August it was announced that Amsterdam’s Van Gogh Museum ended its 18-year sponsorship relationship with the company, following consistent campaigning by art activists Fossil Free Culture NL. Another Dutch museum, the Mauritshuis also cancelled its partnership with Shell. And the oil giant’s sponsorship of a concert series at the Southbank Centre, and a decades-long partnership with the London Symphony Orchestra, have come to an end in recent years as well. (Shell’s logo is still displayed on the Southbank Centre website as a corporate partner.)

Manchester’s Science and Industry Museum has recently faced criticism for a current exhibition – ‘Electricity: the spark of life’ – which is supported by Shell.

Over 58,000 people have signed a petition calling for the sponsorship – which has also been challenged by an open letter signed by 70 artists, scientists, politicians and local groups – to be dropped. Several partner organisations from the Manchester Science Festival, which the exhibition forms part of, have already ended their involvement in protest.

This comes after 46 scientists, researchers and campaigners, including former NASA climate scientist James Hansen, backed a formal complaint to the Science Museum Group calling for it to end its partnerships with Shell, BP and Equinor.

Garrard commented: “By ending its partnership with the National Gallery and shifting into science education, Shell is admitting that it was never a genuine philanthropist but a toxic company with an image to clean up. It is deeply concerning though that the National Gallery didn’t end this partnership years ago on ethical grounds, given that it was fully aware of Shell’s record on climate change, its ties to corruption and its human rights violations.”