Fear of negative reactions is deterring Deaf and disabled musicians from mentioning their access needs when talking to promoters, venues or festivals about performing opportunities. 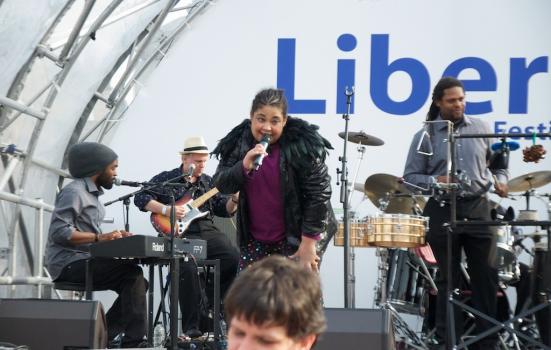 Lizzie Emeh, a musician with a learning disability
Photo:

Deaf and disabled musicians are faced with a range of barriers that prevent them playing live and restrict their access to rehearsing and recording facilities, according to new research.

Half report facing physical barriers at most gigs and 40% have had to cancel a show due to physical access issues with a venue.

The Next Stage survey, led by disability support charity Attitude is Everything, gathered responses from 96 musicians, songwriters, DJs, producers and performers around the UK. Launching the research findings, CEO Suzanne Bull said the findings would make “uncomfortable reading for many in the UK music industry.”

The survey reveals that venues and facilities often present physical barriers, and their policies can also discriminate against disabled people.

Applying for funding to support music making or performing often proves difficult, as does attending sector-led events. Almost a quarter of respondents reported having been unable to attend an event due to an access issue.

Physical barriers encountered included poor signage, steps and staircases, lack of heating, inadequate toilet facilities and the absence of lifting equipment. At performances, uneven surfaces, including the stage itself, were mentioned as common problems. And some music venues expect those with restricted mobility to agree to being carried. One person commented: “I’ve been told ‘I’ll just carry you if needs be’ - totally inappropriate”.

Staff attitudes can make a key difference, and even requests for small adaptions can be rejected. “I asked the sound engineer if he could set up a monitor close to me so I could hear better. He refused,” said one respondent.

Event organisers’ policies can cause as many problems as physical barriers. One respondent commented: “Often times we've been paid in alcoholic drinks. As someone with severe mental health issues this is a problem.” Another pointed to cancellation policies that disadvantage those with poor health who can lose a lot of money if they have to pull out.

The research also found that fear of negative reactions is deterring Deaf and disabled musicians from even mentioning their access needs when talking to promoters, venues or festivals about performing opportunities.

Nearly 60% of respondents reported being ignored or not taken seriously when they had raised issues relating to their health and wellbeing. One person said: “Fobbed off is the easiest way to put it, so you end up not mentioning it in the end.” Another commented: “Sometimes promoters agree to things in advance but don't realise how important they are and ignore the request”.

The needs of those with “invisible” health conditions are particularly at risk of being overlooked. One respondent commented: “Having to explain all my access needs to people who don’t understand my invisible health condition is very tiring and they don't always make the accommodations I need.”

Even participation in industry events - an issue raised in AP in 2016 by Andrew Miller, now the Government-appointed disability champion for the arts and culture sector - still presents serious challenges for Deaf and disabled people.

The musicians cited a range of examples that lead to them being excluded, including small signage, poor lighting for low vision, printed materials with small print, and no accessible toilets.

The social consequences of physical barriers can also be significant. “It can be hard to mingle if everyone is mingling around tables that you can't reach”, one person said, while another reported being “angry and frustrated” by noisy networking sessions and workshops.

The survey findings have prompted Attitude is Everything to renew its calls for action, following the announcement earlier this year of ‘Next Stage’, a new initiative to address the exclusion of disabled musicians. Initiatives within the program include:

Among the first arts venues to fully embrace the Next Stage goals is Milton Keynes music venue The Stables. A £95,000 grant from the MK Community Foundation, announced this week, will be used to fund a two-year programme designed to enhance the organisation’s approach to working with D/deaf and disabled communities as participants, audience members and performers.

The venue will create a bespoke training programme for The Stables’ staff and its 200-strong volunteer base, and will also open up sessions to the wider cultural sector.

An Engagement Manager will reach out to local groups in Milton Keynes to break down some of the barriers to attending the arts, and specialist digital and technology systems will also be developed to improve access for disabled customers.

To help build inclusivity into its future programme, The Stables will work with Attitude is Everything and Graeae Theatre Company, whose Artistic Director Jenny Sealey has been appointed as Artist-in-Residence for next year’s IF: Milton Keynes International Festival.

Monica Ferguson, Chief Executive and Artistic Director of The Stables, said: “This is an important investment in our ambitions to enable us to engage with more people in exciting new ways, and we are immensely grateful to MK Community Foundation for their support and enthusiasm in helping us to work with some of the UK’s most inspiring artists and organisations.”