Analysis of a decade's worth of data finds that regularly engaging with cultural activities is associated with slower rates of cognitive decline. 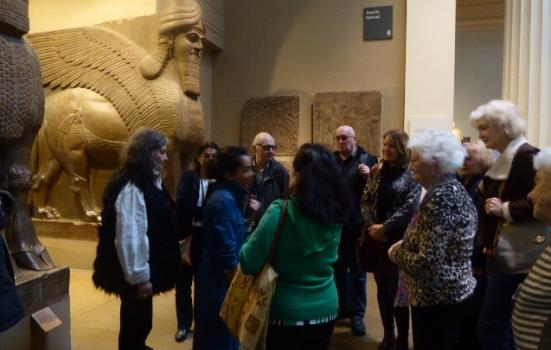 A Museums on Prescription tour of the British Museum
Photo:

Regularly visiting museums is associated with a lower likelihood of developing dementia, according to new research from University College London (UCL).

Analysis of a decade’s worth of data from 4,000 people aged over 52 found that in a given year up to ten out of every thousand who never visited museums developed dementia. This compares with up to three in a thousand of those who visited museums every few months or more.

The findings were presented by Dr Daisy Fancourt, a research fellow at UCL, at a recent conference held by the charity Arts 4 Dementia.

Fancourt said the research findings held true even when accounting for other factors such as the education or wealth of participants.

While loneliness, for example, has often been identified as a risk factor for dementia, Fancourt stressed that the research had found that the engagement with culture provided by museum visits was having this impact in itself, and not simply because it was likely to increase social interaction.

Other UCL research using a similar approach found that attending museums, plays and concerts over the age of 50 was associated with slower rates of broader cognitive decline – as opposed to the development of specific dementia symptoms.

“The more people were engaged, the stronger this association was,” said Fancourt.

The same link was not found for cinema attendance, however – a finding Fancourt speculated might be linked to its “screen-based nature”.

Fancourt said that impact of cultural engagement identified was likely to be because cultural activities combined “multiple different factors that we know are beneficial for health”.

She said these could then lead to psychological, physiological and behavioural responses, which are linked to the prevention, promotion and management of health conditions.

Fancourt argued that the research findings “suggest the relevance of encouraging and helping people to get involved in cultural activities at a time when other types of social and cultural interactions might well be dropping away”.

She added that the evidence that arts and cultural activity may be linked to a lower risk of dementia could be used to make a case for earlier interventions to help people delay cognitive decline.

“Maybe we need to be bringing this earlier,” she said. “Maybe we need to be making the most of the incredibly rich cultural sector that we have to try and get people engaged more in these activities, either when they are identified as at risk of developing dementia or showing signs of cognitive decline, or perhaps even earlier, trying to target people at the point they retire and the point they’ve got more time in older age.”

Dr Helen Chatterjee, a co-founder of the Culture, Health and Wellbeing Alliance, welcomed the research findings, which she described as “really robust”.

While many activities compare these elements to some degree, she said that museums were unique in their ability to bring them together in a way that stimulated the “deep level thinking” that is known to have benefits for people living with dementia.

Chatterjee, who led UCL’s ‘Museums on Prescription’ research project between 2014 and 2017, said that in this way museums can offer a richer experience than occupational therapy, which often focuses on helping people complete simple tasks such as tying shoelaces.

Chatterjee said further research was needed into the optimal levels of cultural activity for cognitive health and the reasons for its impact, but added that it was still a challenge to get funding for research into non-clinical health interventions.