A parliamentary inquiry has also taken the unusual step of warning the public not to purchase tickets from re-seller Viagogo, which it says has caused distress to “too many music fans”. 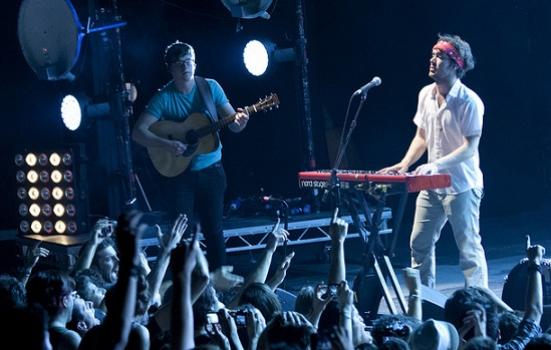 Ben Lovett (right), a member of group Mumford and Sons, gave evidence to the committee

The music industry should reinvest more of its profits in helping early career artists develop, to prevent the sector becoming the “preserve of the bank of Mum and Dad”, MPs have urged.

The recommendation is inspired by programmes backed by Sport England across England’s football leagues, which fund the identification and development of talented young people aged eight to 18.

“Urgent action is needed if the live music industry is to continue to make a significant contribution to both the economy and cultural life of the country,” commented Damian Collins, Chair of the DCMS Committee. “We also look to the music industry to make sure that enough of the big money generated at the top finds its way down to grassroots level to support emerging talent.

“It happens with sport, why not music?”

It is one of several recommendations made in a new report into live music, which follows the committee’s one-year inquiry into the impacts of ticket re-selling, venue closures, and the UK’s planned departure from the EU on the sector’s development.

A range of figures across the sector provided oral evidence to the inquiry, including musician Ben Lovett, member of band Mumford & Sons; DJ and Producer Target; and representatives from music venues, membership bodies and ticketing websites.

The report slams ticket re-seller Viagogo, which last year was referred to Trading Standards for failing to make booking charges clear and labelled “the worst” by Digital Minister Margot James. The committee says the company has “yet to prove itself a trustworthy operator”, given a history of “resisting compliance, court orders and parliamentary scrutiny, and flouting consumer law”.

The MPs took the unusual step of advising the public not to buy or sell tickets through the platform, saying it is imperative that the Competition and Markets Authority (CMA) – which has said it is preparing legal action against the company – acts “promptly and decisively” to bring the company in line with consumer law.

“The conduct of Viagogo, in particular, has caused distress for too many music fans for too long,” the report reads.
They also questioned the effectiveness of legislation intended to block the use of bots to mass-purchase tickets, and a general failure to tackle other means used by ticket touts, such as multiple purchases.

The report provides evidence of “persisting prejudice” against urban music and grime artists, which it says risks the future of a key musical export for the UK. It says local councils are failing to support urban music and that venues have demonstrated unnecessary concerns over licensing.

This emerged in comments from witnesses, who told the committee that grime gigs were often cancelled at short notice, or simply not booked, out of fear that venues would have their licences taken away. DJ Target suggested this came from ignorance, misunderstanding and “institutional racism”.

In response, the report calls for cross-departmental action by Government to develop guidance for licensing authorities, police forces and music venues on risk management to ensure urban music acts are “not unfairly targeted”.

“When it comes to live performance, it’s shocking to hear that grime artists are continuing to face prejudice, which risks hampering the success of one of our most successful musical exports,” Collins added.

The report says the unprecedented closure of music venues in recent years presents an “urgent challenge”. It adds that sites that remain face a struggle to stay open, given rising costs and declining revenues – and that rents and stagnating incomes are particular problems for unsubsidised small and medium-scale venues.

Some people who gave evidence to the committee suggested the well-documented collapse of small venues was handing control of culture over to robots and algorithms, as the important curation function of venues was ceded to services such as Spotify. They noted that grassroots venues – which offer a space for artists to grow – miss out on many of the benefits once an artist steps up to performing in larger venues.

The authors recommend that the Government extends tax relief schemes – or introduces new ones, such as those offered to pubs and small retail properties – to lessen the burden of business rates and protect grassroots venues and independent festivals.

To support the talent pipeline, the report also calls for arts subjects to be added to the English Baccalaureate (EBacc) schools performance measure. The committee says the EBacc makes music in the curriculum particularly vulnerable to cuts as it “sits outside core subjects but does not have as many entrants at GCSE level”.