Even with a light at the end of the lockdown tunnel, musicians' mental health is suffering due to "substantial uncertainty around how quickly the music industry can recover". 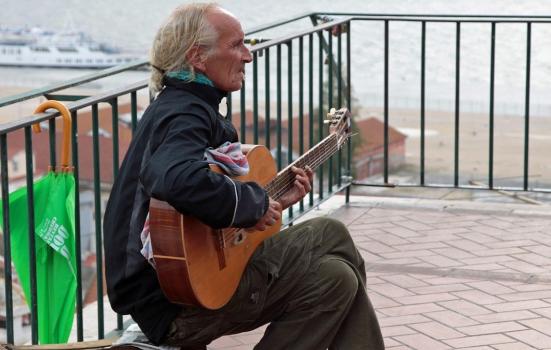 Half of musicians are not making money from their craft, a new survey suggests
Photo:

Musicians' mental health appears to be worsening amid the stress of lockdown and now the "catastrophic impact" of the Brexit deal on touring.

Help Musicians, the UK's leading charity for musicians, says demand for its mental health service grew by 40% in 2020. More than 1200 musicians were supported.

In the past three months, this has increased by another 18%, reaching 65% higher demand than in 2019.

A survey of more than 700 musicians found the mental health of 87% had deteriorated since the pandemic began, with 59% citing the concerns about the impact of Brexit on their industry as a contributing factor.

The effects are tangible: a third of those surveyed were having relationship issues and two out of five feared losing their home.

"We can't sugar coat these findings - we are facing a mental health crisis amongst musicians on an unprecedented scale."

Ainscough said the charity had to "completely revamp" its mental health services - a 24/7 helpline and a debt service that offers counselling to musicians experiencing money issues - in light of the pandemic.

In December, it began searching for a new partner for the helpline, BAPAM, a performing arts medical service that provides a wider range of therapies.

Help Musicians has now launched a fundraising campaign to continue this work, pledging that every penny will directly support musicians rather than its own operations.

"Whilst there may be light at the end of the tunnel with a roadmap out of lockdown revealed, there is still substantial uncertainty around how quickly the music industry can recover," Ainscough said.

Half of the musicians surveyed are currently earning nothing at all from their music.

More than half (56%) are receiving universal credit and another third are relying on loans or handouts from their friends and family.

Brexit has become a more pressing concern in recent months. Opera singer Susan Bullock many performers now find themselves navigating complex and expensive procedures if they want to perform in Europe.

"It is hard to prepare for production after production only to have the rug pulled from under one's feet at the last minute due to either Covid and/or Brexit problems.

"Even the strongest of people have suffered depression and despair at one point or another over the past year and it will take a considerable amount of time for many to recover, both mentally and financially."

'The help they need'

Four in five of those surveyed who said they were experiencing mental health problems had not received an official diagnosis, suggesting "most musicians are not getting the support they need," Help Musicians reports.

The most common complaints, aside from financial woes, were a lack of certainty about the future (91%), not being able to perform (81%) and having no purpose (66%).

A quarter said they are considering leaving the industry for good, echoing other research that suggests about 15% have already departed.

Ainscough said: "Money is just one part of what musicians need."

"Musicians who cannot work don’t just suffer financially; they grieve for the creativity and connections that their music usually brings."