Medway’s City of Culture bid on track despite UCA closure

Medway Council promises a "resilient" bid as local politicians and students oppose the University of Creative Arts’ decision to close its Rochester campus. 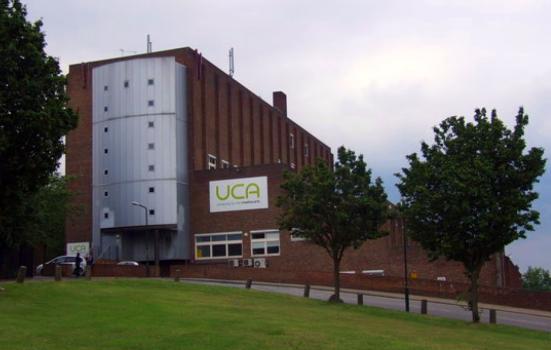 UCA's Rochester campus is set to close in 2023
Photo:

Medway Council does not expect the closure of University of Creative Arts’ (UCA) Rochester campus to affect its City of Culture 2025 bid.

UCA has been involved in the city’s candidacy “since day one”, the council says, but is not crucial to the programme should Medway’s bid succeed.

“We will be very sorry to see them leave, but we are resilient and our creative community continues to thrive and grow,” a council member told ArtsProfessional.

UCA’s plan to close the campus, first announced in May, was criticised by Medway Council leader Alan Jarrett, who branded the decision a “tragedy”.

“They are determined to leave, and shame on them for that,” he told KentOnline.

Local MPs have since lobbied to retain the campus but their offers of support have not been seized.

"The Rochester campus has clearly been neglected for some time and the UCA is just not as invested in the Medway Towns as it is to its other more glamourous campuses," Tolhurst added.

Despite the anticipated closure, Medway Council remains confident its City of Culture bid will benefit from the “meteoric growth” the area experienced prior to the pandemic.

Valued at £4.8bn four years ago, the council estimates Medway’s economy has since increased to £5.9bn.

“Medway’s resilience has been demonstrated time and time again and we’re confident whatever UCA’s final position, Medway will bounce back,” a Medway Council spokesperson added.

Universities have historically been principal partners for City of Culture winners.

The University of Hull’s Culture, Place and Policy Institute ran an evaluation programme after Hull’s 2017 tenure, concluding “the city’s image has changed for the better both within Hull and externally”.

A Medway Council spokesperson commented: “Should UCA close their offer in Medway, we would still have three thriving universities, which is still more than many cities across the country.”

UCA said it remains “keen to support the bid with [its] expertise,” but declined to explain what this might look like.

A UCA spokesperson told ArtsProfessional the Rochester campus had become “unsustainable” due to a backlog maintenance bill of £18m.

The decision to close led Medway’s three MPs to write to UCA’s President and Vice Chancellor Professor Bashir Makhoul to say they would have “done everything possible to help secure government funding [to] maintain this important facility”.

Medway Council said it has been in contact “with a range of partners to find solutions and maintain a UCA presence in Medway”.

“We want to maintain UCA’s presence in Medway and have made contact at the highest levels to offer our support to try to achieve that,” Cllr Jarret told ArtsProfessional.

The Rochester campus employs up to 100 staff members and has 1,000 students.

All university level courses currently taught at the site, including fashion and textiles, photography and interior design, will be relocated to other UCA campuses.

The university hopes to redeploy staff wherever possible.

Alongside the Rochester campus closure, UCA announced it will stop providing pre-degree and foundation courses after the 2021/22 academic year.

Medway will retain the largest provision of further education in the county at MidKent College, according to the council.

But the decision was criticised by UCASU, UCA’s students’ union, whose board was not consulted by the university prior to the announcement.

A statement on the UCASU website says the decision is a “shock”. 60% of students surveyed felt negatively about the closures.

UCA’s withdrawal from further education comes as the university focusses on becoming “a global creative university” for undergraduate, postgraduate and research degrees.

It plans to create ‘Centres of Excellence’ that will give students access to more facilities, collaborative opportunities and academic expertise.

The centres are expected to be established at UCA’s Epsom campus from 2022.

Stories of racism at the Barbican 'ring true', Gompertz says

Monday, 25 October 2021
Stories of institutional racism at the Barbican Centre "ring true to me", Will Gompertz has said. The Interim Managing Director, promoted following Nicholas Kenyon's resignation in June, told The... read more
(The Times)

Monday, 25 October 2021
A petition urging the Government to keep manifesto promises around arts funding for young people has received more than 20,000 signatures online. The petition comes ahead of Wednesday’s (October 27) ... read more

Monday, 25 October 2021
British robot artist Ai-Da has opened an exhibition and sculpture trail at Egypt’s pyramids after being held up at the country's border for 10 days. The world’s first artificially intelligent ... read more
(artnet News)