The "ambitious and forward-thinking" document will be the cornerstone of a bid for UK City of Culture 2025. 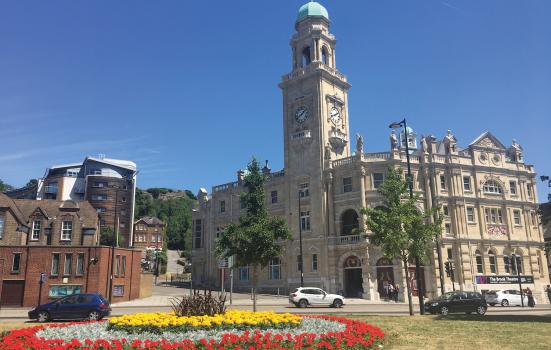 An “ambitious and forward-thinking” new cultural strategy aims to make Medway known internationally for its creativity and culture by 2030.

The ten-year Medway Cultural Strategy was drafted by members of the South-East region’s creative sector, with much of the process taking place during last year's lockdowns.

Medway Council said the strategy is “a cornerstone” of the city's bid for UK City of Culture 2025.

Speaking to ArtsProfessional, Paul Cowell, Medway Council’s Head of Culture and Libraries, said the doucment "is not a council strategy".

"It’s a Medway-wide strategy. There is complete ownership by the Medway creative community, from the big players in the area like Chatham Historic Dockyard and [simulation entertainment software developer] Dovetail Games, to theatre companies that are based here and artists working in their studios.”

An 11-person Medway Cultural Strategy Drafting Group wrote the strategy with a creative consultant's assistance following a series of remote group meetings and an initial pre-lockdown public event that attracted about 150 people.

Most of the group are freelance practitioners working across film, fashion, theatre, literature, visual arts, education and heritage, with just two employed at cultural organisations.

Among the strategy’s key aims is tackling Medway's lack of affordable spaces for the creative sector.

Through inward investment, it hopes to develop “beacon spaces” for cultural activity, which will “shine out from Medway whilst [being] rooted in their communities”.

As part of its ambition to improve Medway’s traditionally low engagement with the arts, the strategy proposes integrating arts and culture into early years education through a creative curriculum.

It will also promote more focus on micro-grants and other support for grassroots cultural activity, while developing post-16 opportunities in the arts to retain and attract young practitioners.

Ultimately, it aims to ensure Medway’s cultural sector is “fully connected, physically, digitally and philosophically” by 2030.

A potential year as City of Culture is seen as “a platform for growth, not the ceiling of success”.

A grassroots approach rather than top-down council-led work is seen as key to making the strategy a success.

Cowell said the collaborative, partnership approach to creating the strategy will continue into its delivery.

With an “integrated, iterative evaluation process”, there was scope for the strategy to evolve in response to local or international events, he said.

“This isn’t something that is written in stone for the next ten years; we’ve absolutely given it space to breath and grow.”

“The cultural strategy is the legacy foundation for our City Of Culture bid,” Cowell said.

“If we were to win City of Culture it would just amplify the themes of the strategy and push us more quickly to reach our destination faster.”

The “aspirational” strategy is defined by six key values and organised around five themes.

The themes that underpin the strategy's delivery are  connectivity, shared ambition, spaces and places, creative people, and community engagement.

The strategy's creators hope that these will help it deliver its values of working in partnership, thinking strategically and long term, acting in an environmentally sustainable way, enhancing inclusion and access for all, recognising culture as integral to wellbeing and health, and crucially, evaluating the impact of its actions before moving on.

Creative Medway, described as “a new and radical partnership that embodies the values of the strategy”, will lead its delivery.

It was a real pleasure to work in Medway and advise on the early stages of their UK City of Culture bid. The role of culture in place making is so important to towns and cities. Medway - historically connected by a very large river and estuary is an inspiring place with great ambitions. Congratulations on your cultural strategy.
It was rewarding to support James and Ruth of GJG Consultancy on this project. Keeping the sector engaged during COVID was challenging, so it's good to see that their inclusive methodology and delivery mechanism (specially developed for Medway) has come to life so successfully. You can read more detail at www.medwayculturalstrategy.co.uk.
Having done research including focus groups and catchment area analysis in 2005 for the Council and their development organisation Medway Renaissance, it is important to understand that the Medway Council area had a population of 249,488 people in the 2001 census, making this a major urban area in UK terms, larger than cities such as Hull, Stoke-on-Trent, Plymouth, and Brighton. And with a well-populated catchment area too. Planned short-term growth in population to 300,000 takes it to matching in numbers cities such as Newcastle- upon-Tyne, Sheffield and Nottingham. By any standards it is seriously under-provided for in terms of arts provision and places for creativity. Medway Renaissance recognised the implications of such a relatively large growing city in terms of developing provision and created a brief for a “feasibility study and implementation plan for new cultural facilities in Chatham Centre”. Most of the then local venues and arts organisations across Medway were involved in reviewing the needs and basic requirements. This led to completed advanced level feasibility studies in 2006, with identified sites on the river, including architectural design development, for ArtYard (art gallery and film centre) and The Reach, a large scale theatre for Medway. These had initial discussions with potential development partners and operators. Medway Renaissance facilitated discussions to try and take the projects forward, but it always appeared it was the Council - only formed in 1998 - which still saw 6 towns and not the City it had become, and had low belief in the expectations of residents. The work to develop this new cultural strategy looks great, and especially important to hear confirmed those bottom-up voices articulating their needs and concerns. Let us hope Medway Council can be helped to listen and take this seriously, so this won't end up on a shelf. I am optimistic and I know some places have spent decades to reach what they wanted. If anyone wants copies of the studies I refer to, contact me on [email protected]
It was a real joy to work with Medway on this. Ruth Melville and I loved the opportunity to test, share and further refine approaches we have been developing over a number of years. The enthusiasm and incredible buy-in from communities across Medway was amazing and crucial to the process and its ongoing success. It was great to have Medway Council’s buy-in in making the big shift to a truly inclusive approach to strategy development and delivery. To read more please visit http://medwayculturalstrategy.co.uk/