A new culture strategy outlines plans to increase access to the arts and ensure London is renowned for its culture internationally. 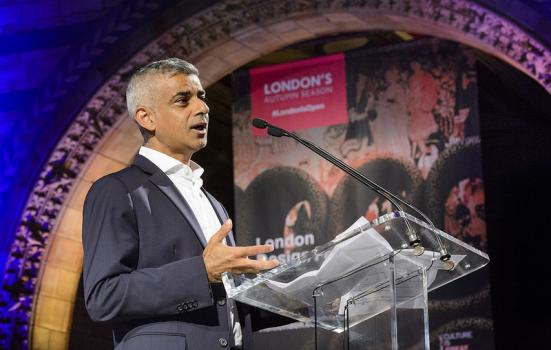 London Mayor Sadiq Khan has made a plea for all schools in the capital to adopt his collection of free lesson plans, resources and access to culture events to “bring lessons to life”.

He says that a wider take up of the London Curriculum, developed in partnership with over 80 cultural organisations including the National Theatre, Sadler’s Wells and the National Portrait Gallery, will help “ignite young people’s creativity”.

The plea forms part of his authority’s wider push to brings arts and culture back into the heart of the curriculum and address an identified 35% fall in arts GCSE entries since 2010.

“The Mayor believes that the arts have been downgraded in schools in response to growing pressures on school budgets, changes in how schools are rated in league tables and difficulties in teacher recruitment and retention,” a spokesperson said.

“Government…must reprioritise arts and creative subjects in the curriculum as a matter of urgency”.

The recommendations emerge out of the Mayor’s culture strategy, which notes that 60% of the capital’s secondary schools and 300 primary schools have to date used resources from the London Curriculum.

The strategy, which was put out for public consultation earlier this year, is based around four themes:

It comes as Government figures confirm the continuing growth of the creative industries – now worth over £100bn – and the publication of more evidence about the barriers to accessing a job in the creative sector and falling participation in culture.

The document notes just under 50 grassroots creative projects have received micro grants through the city’s new Culture Seeds programme – including a visual arts workshop for volunteers who helped in the aftermath of the Grenfell Tower fire.
The strategy also highlights recent actions, such as the appointment of a Night Czar, the creation of a ‘culture at risk’ office to stem the loss of artist studios and music venues, and the introduction a dedicated music fund, as initiatives that ensure London’s culture is “admired and envied the world over”.

“We’re lucky that we live in one of the most culturally rich cities on the planet, with our creative industries playing a key role in our economic success, but sadly too many Londoners are still missing out,” commented Khan.

“That’s why I’m working hard to expand access to culture into every corner of our city, supporting a broader range of cultural facilities and involving communities at the heart of my programmes.”

Moira Sinclair, CEO of Paul Hamlyn Foundation Vice Chair of the Mayor’s Cultural Leadership Board, said she was “particularly proud” to see an emphasis on grassroots projects and working with the boroughs across London. “Culture for All is ambitious and visionary, and all the better for that,” she said.