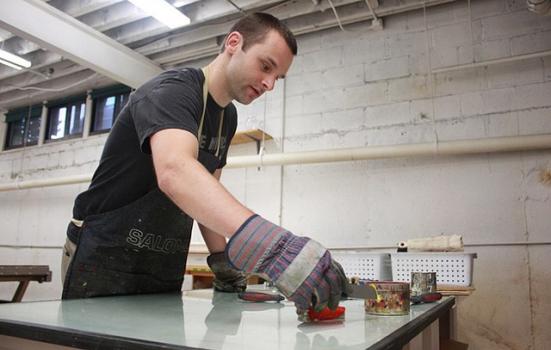 London Mayor Sadiq Khan has launched a new independent trust to protect and support affordable artist workspace in the city.

The Creative Land Trust is backed by £4m from City Hall and £2m from Arts Council England (ACE), alongside funding from Bloomberg Philanthropies.

The Mayor’s office said the trust is “an independent organisation that will provide financing for affordable workspace providers to buy buildings and will purchase its own property to be used as permanent workspaces for artists in London”.

It will use the initial funding to attract further investment, with the aim of securing 1,000 affordable workspaces in its first five years.

Speaking at the trust’s launch, Khan said “London’s culture is the golden thread that runs through our social fabric. It gives our city a vibrancy and dynamism that is without parallel”.

But he said that the city’s cultural sector was being squeezed, with creative workers “at risk of being priced out of the communities they call home” due to rising rents and high property prices.

Research for the Mayor last year found that artist workspace in London was becoming more expensive, a trend borne out by the recent announcement that studio provider ACAVA will be raising its rents by an average of 25% to stave off the imminent threat of bankruptcy.

“It’s clear we are now reaching a crisis point,” said Khan. “We need to stem the loss of the workspace they depend on, and fast.”

London’s Deputy Mayor for Culture and the Creative Industries, Justine Simons, said the problem extended beyond artists, with London having recently experienced a 40% fall in the number of music venues and a 50% reduction in clubs. “London is experiencing significant pressure on its cultural infrastructure,” she said. “We don’t want to turn around in 10 or 20 years’ time and realise we took our eye off the ball.”

Outset Contemporary Art Fund is to support the Trust by bringing public and private partners together with workspace providers.

The Mayor’s office said: “The Trust will work to secure investment to increase affordable workspaces in the city by bringing together local authorities, developers and the creative industries. The returns generated by providing financing will be reinvested into the Trust.”

Sara Turnbull, Founding Director of social enterprise consultancy Workwild and Chair of the Greater London Authority’s (GLA) Workspace Providers Board, has been appointed as Interim Director of the CLT, and will lead the organisation until trustees are appointed.

Nicholas Serota, Chair of ACE, said that the problem of artists being priced out due to high rents was not just a problem for them, but for “the city and the community”.

He added that London’s creative economy was worth £47bn and “we need talent here and we need to attract talent from abroad in order to keep that economy developing”.

“If we are going to maintain our place as a leader, we have to keep creatives right at the heart of the city, and we have to ensure that they have adequate space in which to work,” said Serota. “Because of the really significant problem that artists are facing, we need to see something on a scale and with a permanence that will ensure that this city continues to thrive”.

The new Trust is inspired by a model from San Francisco, the Community Arts Stabilization Trust.

It is understood that CLT has been exploring a range of operating models including buying property outright, co-ownership and transfer of ownership. Simons said the organisation would publish criteria in the spring and put out a call for applications in the summer.