Manifestos vary in commitment to the arts

All bar UKIP affirm the value of the arts and culture in society, but only The Greens commit to increased funding and a more holistic integration of the arts into social progress. 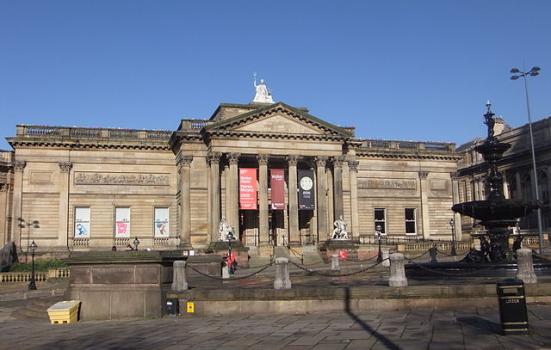 Walker Art Gallery: among the DCMS-sponsored museums and galleries where the Conservatives, Labour and Liberal Democrats have all pledged to sustain free entry
Photo:

Six of the seven leading parties have now published their manifestos, revealing varying commitment to arts and culture. The Green Party is alone in its pledge to reverse the tide of cuts with an additional £500m for the arts, while UKIP say they would abolish the DCMS. Except for UKIP, all affirm the necessity of the arts and culture in society.

Labour makes a clear commitment to working with public bodies to rebalance funding across the country, while The Greens go a step further, pledging to “give local authorities powers to encourage local live performance in the arts by moving funding from the regional to the local level”. The Liberal Democrats and Plaid Cymru say they would guarantee access for all, but make no mention of geographical distribution, while the Conservatives claim credit for having already achieved geographical spread: “Over the last five years, we have made sure that arts funding benefits the whole of the UK.”

Labour and The Greens both mention creative education. Labour will guarantee a universal entitlement to it, intending to strengthen creative education in schools and after-school clubs. The Green Party also pledges to support creative and vocational areas in the curriculum, noting that the future of the arts and humanities has been “endangered” by a “systematic denigration” by political parties and university administrations that see these courses as an expensive luxury.

The Conservative Party pledges to train an extra 17,500 maths and physics teachers in a bid to make Britain “the best country in the world for developing maths, engineering, science and computing skills”. It continues to define the ‘core’ subjects as English, Maths, Science, Languages and either history or Geography, with the arts notably absent from the list.

This science focus is echoed by the Liberal Democrats, who note the need to inspire more children to study Science, Technology, Engineering and Maths (STEM) subjects, and say they would encourage schools to have at least one science specialist amongst their staff. UKIP adopts a similar focus, pledging to remove tuition fees for students taking approved degrees in science and medicine.

Increased commitment to the creative industries, most often via expanded apprenticeships, are common to all parties except The Greens, UKIP and Plaid Cymru, who fail to mention them at all.

The Conservatives say they would continue and potentially extend tax reliefs for those working in the creative industries, while the Liberal Democrats mention the specific aim of doubling the number of businesses that hire apprentices, finding new markets in the creative and digital industries. They also pledge continued support for the Creative Industries Council as a tool to address barriers to finance for small creative businesses, and to grow the creative industries as a whole. Conversely, Labour plans to establish a new Prime Minister’s Committee on Arts, Culture and Creative Industries, with membership drawn from all sectors. Motivation for this move is a need to bring key issues of concern “directly to the attention of the Prime Minister”, and to implement a “strategy for the arts and culture and cultural provision across the country to improve access for all”.

The policy of free access to the national museums and galleries, introduced under the Blair administration, is clearly viewed as a vote-winner, with four of the six parties – Conservatives, Labour, Liberal Democrats and Plaid Cymru – mentioning their commitment to ensuring that galleries and museums are subsidised sufficiently for this to continue. The Greens and UKIP do not mention any policy change in this area.

The Liberal Democrats and The Green Party lead on taking a holistic approach to arts and culture. The Lib Dem manifesto states “arts, creative industries and culture are crucial to Britain’s success and essential for personal fulfilment and quality of life”. The party intends to champion an evidence-based ‘social prescribing’ of arts and sporting activity in order to tackle health conditions such as mental health problems and obesity. The Green Party states its belief that “the arts and humanities have an essential part to play in creating a more democratic, sane and participatory society”. It is committed to providing access to artistic and creative facilities when implementing restorative justice and offender rehabilitation.

UKIP discusses cultural values as a tool to bind people together, but champions the celebration of ‘Britishness’ above alternative cultural values, stating a belief that “multiculturalism has led to an alarming fragmentation of British society”. It pledges to conduct a funding review into public bodies “which promote divisiveness through multiculturalism” – a policy that could have implications for Arts Council England’s work in the area of cultural diversity.

The SNP is due to publish its manifesto early next week.

I will be very surprised if the SNP manifesto contains a significant reference to the culture. Culture is devolved to the Scottish Parliament and to Assemblies Wales and Northern Ireland. Westminster retains responsibility for culture in England only. Its UK remit in this area covers only broadcasting and the lottery (raising the money and disbursing it to the relevant bodies). And for avoidance of doubt, education is also devolved. It's complex, I know, and it would have been so much easier had we voted Yes last year. But it is also tiresome that otherwise respected commentators and researchers still fail to grasp that complexity.