Manchester’s Factory to open in 2023 after delays

The £186m arts complex continues to make a “strong strategic case” with a revised business case and new training programme. 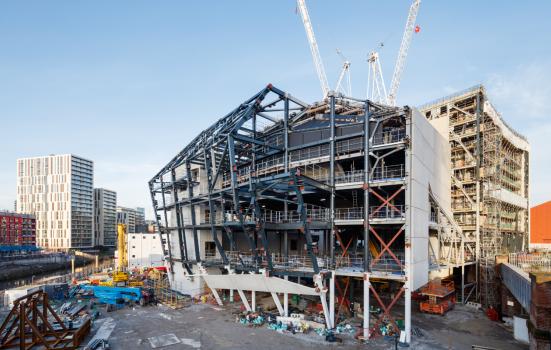 Construction at The Factory, March 2021
Photo:

Manchester’s flagship arts venue The Factory won’t open until 2023 due to delays caused by Covid-19.

But minutes of ACE National Council meetings show the grant was withheld until March. The Factory’s business case was four years old when the council applied for funding.

Despite construction delays, The Factory’s academy training programme delivered by Manchester International Festival (MIF) recently announced plans to offer free creative training to 250 local residents this year – and a total of 1400 over the next five years.

Originally approved in 2018 with a £111m budget and September 2020 opening date, The Factory’s construction has been marred by delays and overspends.

Now expected to cost £186m, the building is due to be completed late in 2022, with the first programmed activity expected in early 2023.

Those supporting the Factory’s delivery remain confident the venue will quickly break even. Manchester City Council predicts it will boost the city’s economy by £1.1bn over its first decade in operation.

"We're extremely grateful to DCMS and Arts Council England for their continued support for The Factory and for the substantial award to help address the unforeseen additional costs and delays on the project due to Covid-19,” Council Leader Sir Richard Leese said.

ACE is continuing to monitor the Factory’s progress to ensure MIF and Manchester City Council can bridge any underspend caused by the delays.

The National Council has asked for more information about recruitment plans and artistic programming.

Manchester City Council says the grant was not delayed – it was always a condition of payment that the business case be updated.

“This was done within the agreed timetable and the £21m grant was confirmed.”

Active fundraising is ongoing, though the Factory build is not contingent on extra finance.

Alongside its artistic programming, The Factory is set to become a training centre for people looking to pursue careers in the creative industry.

“A key part of our vision [is] to put skills and training opportunities at the heart of The Factory,” MIF Executive Director Randel Bryan said.

The 2021/22 Factory Academy training programme will offer over 250 free creative training opportunities to Greater Manchester residents who are unemployed or on low wages.

First launched in 2018, 50% of graduates from last year’s cohort progressed into work or further study within three months.

This year’s graduates will have the opportunity to apply for a six-month paid Kickstarter role with organisations working with on the design and construction of the Factory.

“Our aim is to reach people that wouldn’t usually consider a career in the cultural industries and to remove some of the traditional barriers,” said MIF Acting Head of Skills and Training Gary Briggs.

“All the skills and knowledge you’ll acquire align to employment within the creative industries and beyond and are transferable across the sector.”

According to research by the Confederation of Business Industry, Manchester was the second largest creative city in Europe prior to the pandemic, bringing £1.4bn to the city’s economy.