Plans for The Factory Manchester get the go ahead, but current costings leave the council with £25m to raise before 2019. 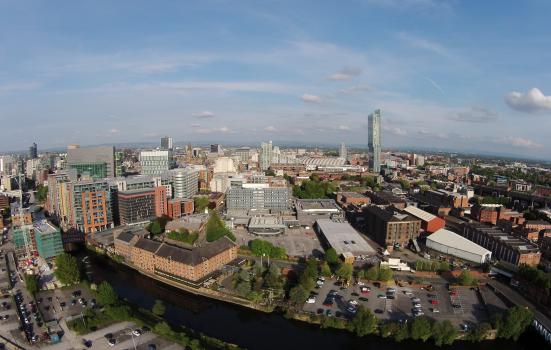 The site, seen from the air

Approval to take forward proposals for The Factory Manchester, the venue providing a “cultural counterbalance to London”, was given by the leader of Manchester City Council Sir Richard Leese this week. An accompanying report highlights the projected economic impact of the venue scheduled to open in 2019.

The Factory is to comprise a large-scale, flexible theatre space, with the ability to transform from a 2,200-seat theatre to an immersive space with a standing capacity of 5,000, and an additional space complete with acoustic separation. Located at the centre of the St John’s creative village, on the former Granada Studios site, it will become a permanent home for the Manchester International Festival. Developer Allied London’s plan is to create a neighbourhood with a “vibrancy similar to Covent Garden,” with independent businesses, workspace and leisure developments and up to 3,000 town houses and apartments.

It is hoped The Factory will “accelerate” economic growth in the region. Tourism contributes an estimated £6.6bn to the economy of Greater Manchester, while visitor numbers have increased from 87 million to 109 million between 2005 and 2013. The report estimates that within 10 years, The Factory’s presence will add £138m to the economy and lead to the creation of 2,500 full-time jobs.

In December the Government pledged £78m of the projected £110m budget, with £3.5m being made available this year to complete the initial stages of the project. A detailed design and costed proposal is to be completed by the end of 2015, but it is hoped £7m will be secured through Arts Council England’s capital fund, leaving up to £25m for Manchester City Council to raise through a variety of sources including philanthropy and capital funding. Once open the council will not be required to invest “significantly more” than its current levels of support to the Manchester International Festival, but a substantial proportion of The Factory’s income is expected to come from Arts Council England.

Construction for the venue is scheduled to last from January 2017 to December 2018, followed by test events and an opening ceremony in 2019.