Cultural spend has been reallocated or cut to zero at four more councils this year, and some local authorities are turning a profit through culture and heritage. 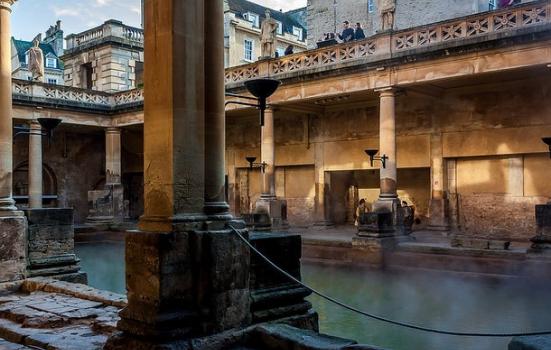 Bath and North East council anticipates making money from culture this year, driven by income from the Roman Baths
Photo:

PapaPiper (Travelling with my camera) on Visualhunt.com / CC BY-ND

England’s local authorities are continuing to cut their culture budgets, with the amount allocated to culture this year 2.2% lower than last year.

The £8.8m budget cuts for 2018/19 extend the ongoing decline in councils’ cultural spending, which has fallen by roughly £48m over the past five years.

The figures, revealed in new data on local authority revenue budgets for 2018/19, show that several large councils have cut their culture budgets entirely.

This does not necessarily mean they have turned their backs on the arts. Some have transferred responsibility for culture to an independent entity, while others are balancing their budgets with raised income. A few that once allocated money for the arts now plan to turn a profit from cultural activities.

443 local authorities, ranging from city and county councils to police and parks bodies, submitted their revenue budgets to the Government for 2018/19. These reveal a total planned culture and heritage spend of £392m.

Five years ago, budgeted culture spend was £439m. With the exception of 2014/15, when culture spend held firm at £440m, the amount allocated to the arts has decreased every year since.

By October 2017, 144 local authorities out of 375 across England and Wales had no dedicated arts officer or arts service.

Research by AP last year indicated that local authority cuts have hit small arts organisations and community groups the hardest, with 69% of arts workers believing that grassroots arts activity has been the most badly affected.

West Devon, which allocated a budget of £61,000 in 2013-14, and £12,000 in 2017-18, has allocated nothing for this year. It told AP the amount represents funding for the ‘Tamar Valley Area of Outstanding Natural Beauty partnership’, which was shown in a different category line for the annual return in 2018-19. “Therefore it is not that the funding has been withdrawn, it has just been re-categorised under a different heading in the Government returns”.

Budget cuts are biggest in shire counties – county-level councils that do not cover a metropolitan area. These councils, which include Norfolk, Buckinghamshire and North Yorkshire, spent a total of £39m on culture in 2013/14, but this has fallen by 33% to £26m in 2018/19.

According to the government figures, five of the UK's 27 shire counties have cut their culture budgets entirely over the past five years, although in one case the apparent cut is the result of an administrative error.

West Sussex cut its culture budget from £162k to zero, as has Cumbria which formerly allocated £121k to culture.

A spokesperson for West Sussex explained the decline was a result of a specific line of financial support for Chichester Festival Theatre moving into different services in the council, and the closure of an arts scheme. In its place is support for a wider match funding scheme for crowdfunded projects, many of which, the council says, have a culture element.

A spokesperson for Cumbria said responsibility for culture was devolved in 2014/15 from the county council to six district councils. One of these, Carlisle, has allocated £2m to culture this year – up £500k from its allocation five years ago.

Another council that appears to have completely cut its culture budget, Dorset, said this was because the money had been mistakenly included in the archives budget.

Dorset County Council completed a process of ‘spinning out’ arts development in 2015 to an employee-owned community interest company, the Arts Development Company.

This explanation is supported by the official figures, which show Dorset's budget for archives increasing by more than £500k in 2014/15, when its culture budget appears to be cut.

The budgets reveal only planned net expenditure, and some councils with a low budget allocation are aiming to recoup as much money as they spend though trading activities, partnership working and fundraising.

Eight local authorities are expecting to make money from culture this year, of which five have switched from budgeting for a net spend on culture five years ago to anticipating a net income.

Bath and North East intends to raise almost £7m from culture in 2018-19, which a spokesperson put down to funds raised through the renowned and council-run Roman Baths museum.

Other councils expecting to generate a profit include Bournemouth, which predicted to make £740k this year. A spokesperson said this was possibly because the figures take into account revenue received by BH Live venues, which runs the town’s leisure venues including Pavilion Theatre and Bournemouth International Centre.

1/8/18 This article was amended to include new information provided by Dorset County Council, who did not respond to a previous request for comment by ArtsProfessional.