Studios have been unsure about their eligibility for funding during the pandemic and don't know where to turn for advice. 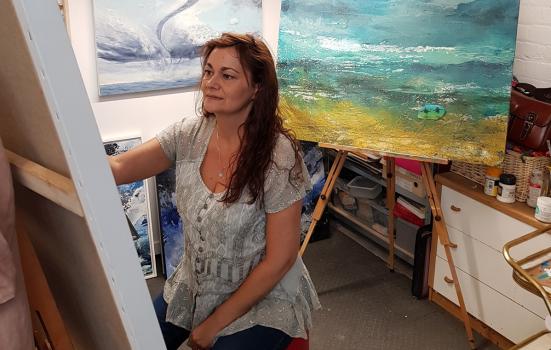 Artists' studios need to be more affordable than those for tech or gaming professionals, Art in Liverpool says

Liverpool risks losing its artists and studios if they are not given the support they need.

A report by Art in Liverpool, which represents the city’s 35 artist studios and about 500 artists, reveals many studios were unsure whether they were eligible for funding during the pandemic, while others did not know where to turn for advice and support.

State of the Studios notes the situation reflects the day-to-day of artists who feel they exist outside of the cultural infrastructure. If this disconnect is not addressed, “spaces will disappear and a vital resource will be lost," the report says.

While she acknowledged the threat to studios "is something that needs to be looked at", Lovell offered little by way of concrete plans, saying only that "local authorities have a responsibility for their planning and setting business rates".

The report notes: "Many artist studios were ineligible for funding support in 2020 and when they were, the language or presentation of the opportunity appeared to exclude them."

"As cultural regeneration is a major part of the strategy for recovery post-Covid, artist studios provide an existing connection into communities and high streets, and should be the first port of call for local authorities looking to rebuild and utilise grassroots artistic and creative communities."

The affordability of artists studios in Liverpool is a major concern, State of the Studios says.

According to Arts Council England’s Livelihoods of Visual Artists report, artists earn just over £16,000 a year, with £6,020 coming from their artist practice. The Check A Salary website indicates pay for artists in Liverpool varies, from £15,000 to £50,000, while rent on local studios ranges from £55 to £180 per month.

"Rents in studio spaces, therefore, cannot be on a parallel with those in the tech industry, gaming or creative studios," the report says.

Lovell said she is “aware of the need to better protect and support those creatives” seeking affordable workspaces and that the opportunities will improve as the city's cultural sector regenerates.

But, she added, it will come across issues relating to private landlords, and planning permissions that were signed off a long time ago.

The report concluded that artists and creative spaces need support from all sides: their networks, the wider cultural sector and funders like local authorities.

Artists need "the comfort and reassurance that comes with knowing they are in safe spaces, with adequate heating, water and security, to know that their space is theirs for long enough to plan ahead," it said.

Many artists were confused about their eligibility for the Culture Recovery Fund and may have missed out on vital support.

"Funding guidance from almost all grant awarding bodies assumes a reasonable level of familiarity with the application process. This familiarity isn’t shared by studio groups," the report said.

"It is about signposting people to the right information... [and] putting things in place, such as getting people from different funds to talk to those communities."

Liverpool City Region Combined Authority is also working with March for the Arts, an organisation set up last year to help the art sector access support.

Working with March for the Arts means the authority can ensure freelancers access information and support as soon as funding rounds open.