Arts Council England will spend 100% of its budget uplift in the regions as Government commits to "significantly increasing" cultural spending outside the capital. 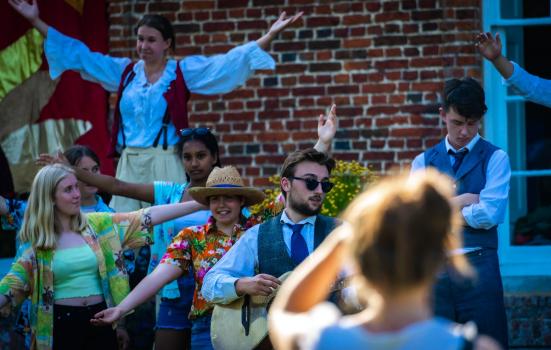 More spending will be committed to increase cultural engagement outside of London
Photo:

Engagement with local culture will grow in every area of the UK by 2030 under the Government's Levelling Up plan.

100% of a budget uplift for Arts Council England will be spent outside London as part of a commitment to "significantly increasing cultural spending outside the capital".

They could be pivotal steps towards redressing the entrenched regional divide in arts funding that sees London receive roughly a third of grants.

"As some areas have flourished, others have been left in a cycle of decline... this white paper is about ending this historic injustice and calling time on the postcode lottery," Levelling Up Secretary Michael Gove said.

Or it might be, in the words of Gove's shadow counterpart Lisa Nandy, "more slogans and strategies, with few new ideas".

DCMS said Tuesday (February 1) that more than 100 places outside of London would receive extra arts and culture funding from 2023. This doesn't mean more money than has already been committed, just that it will be shared more widely.

The amount available to regional areas hasn't been decided, but could be as much as £68.6m based on historic funding levels and a 5.8% uplift for DCMS in last year's Spending Review.

A delivery plan will be set out in the spring.

The commitments will be welcomed by nine local authority areas set to agree "London-style" devolution deals.

York and North Yorkshire will pursue a combined mayoral authority, a change that might help the ambitions of the All-Party Parliamentary Group for Northern Culture.

A report released by the group last week called for better cross-government communication and "more devolved and less centralised funding" to incentivise creative buisnesses to relocate to the north.

North of Tyne Mayor Jamie Driscoll is quoted: "You cannot level up the north from Whitehall."

There will also be 55 'Education Investment Areas' in parts of England with disappointing school outcomes.

The Department for Education will pay schools in these areas to retain good teachers and prioritise new specialist sixth form free schools to "ensure talented children from disadvantaged backgrounds have access to the highest standard of education", according to the white paper, though it's not yet clear whether declining specialisms like music and drama might benefit.

The way Levelling Up is being delivered may not represent value for money, the UK's spending watchdog has warned.

The National Audit Office on Tuesday said £1.7bn of the £4.8bn fund has already been committed without the level of "scrutiny and independent challenge" it expects for such large scale spending.

Other analysts caution it will take time to even the playing field across the UK.

Analysts EY say the East Midlands and South West of England are the only regions expected to gain economic ground on London by 2025. The difference is largely down to local specialisms, meaning areas reliant on hard-hit tourism and culture will be slowest to recover.

The Institute for Fiscal Studies says education is key.

"Regional inequalities in incomes, wealth, health and education have persisted for decades. There are far more graduates in places like London and the South East where opportunities for high skilled, well paying jobs are much more plentiful than in other regions," Director Paul Johnson commented.

"Levelling up economic outcomes between places must mean getting high paid jobs more evenly spread - much easier said than done."

I am sure that this has been given due consideration but how is 'outside London' been defined? Is it by the use of postcodes? Is it by a demarcation of boundaries say arts organisations which are ten miles outside London? Here is a concern. Many arts organisations depend on audiences which are based in London using postcodes as a divider. I am sure that the new policy will be much easier to implement say, 50 miles away from London.