Cost-saving measures by Leeds City Council will see access to Carriageworks theatre restricted and a price hike on room hire that could affect hundreds of members of voluntary arts groups. 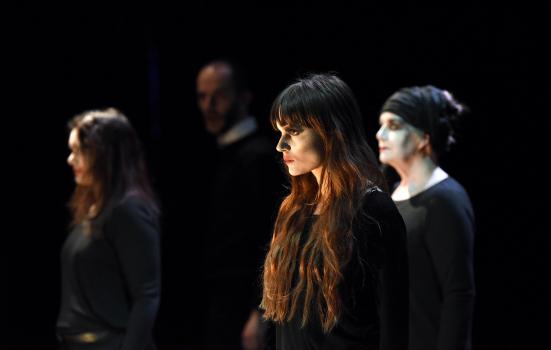 A performance by a member of Leeds CAN
Photo:

Community arts groups in Leeds have expressed confusion and sadness over council plans to restrict access to a theatre they were instrumental in setting up.

The 11 dance, theatre and creative groups that use the City Council-run Carriageworks theatre face a 500% increase in the hourly rate for room hire; early closure of rehearsal facilities; and “eviction” from workshop spaces used to create sets.

In addition, Leeds Community Arts Network (CAN), which represents the groups and their 800 members, claims one company has had its annual November slot at the theatre cancelled, and other groups have been left without confirmation for their usual autumn shows.

“The Carriageworks was built for community arts, and the remit was to use commercial activity to subsidise the community activity,” explained Matthew Stirk, Chairman of Leeds CAN. “This ethos has gone without any consultation.

“I don’t mind the theatre making a profit, or paying slightly more to rent a room. But not at the expense of the community.”

He added: “These proposals risk ripping the soul out of the theatre.”

Leeds City Council has faced a 47% cut to core funding since 2010, and a spokesperson said the proposed changes “are about providing a fair and sustainable service which balances the varied needs of all the diverse groups which use the theatre”.

Created in 2005 as a replacement for the Civic Theatre, Carriageworks is home to organisations including Leeds Youth Opera, Leeds Children’s Theatre and Our Community Dances.

Leeds City Council set out the theatre’s remit in 2007, stressing the theatre should “maximise commercial income wherever possible to facilitate affordability for the community, youth and amateur groups”.

Leeds CAN considers plans to halve the number of rehearsal rooms open to the network and end access to the rooms at 8:30pm, instead of 9:30pm, a “double whammy” that will affect most of the groups it represents. Many of the network’s members have family or work commitments that prevent them from attending rehearsals earlier in the evening.

The network also described plans to increase the room hire fee from £5 an hour to £30 an hour as “counter-productive”. It warned it will undermine the city’s Cultural Strategy for 2017-30, which outlines using cultural activity as “a means of improving the quality of life experienced by every person and every community in Leeds”.

“We want to support the council, but we want a fair and reasonable rate increase,” Stirk told AP: “The Council faces a 40% cut, and we’re sympathetic with that – but how can they suggest a price increase of 500%? Why not 40%?”

The Council says other arts organisations and charities in the city pay between £25 and 35 an hour, and this is “broadly in line with other council venues”. It plans to implement the increase for community organisations at Carriageworks gradually over the next four years.

“We think it reasonable to increase the Network’s charge slowly to mean that access to the building becomes fair for everyone,” a spokesperson added. “We have been in discussions with Leeds Community Arts Network about these changes since 2016 and have emphasised that some additional flexibility would help keep the Carriageworks Theatre sustainable for years to come.”

Stirk said companies in the network write business plans based on a week of performances at Carriageworks, but some are yet to receive confirmation of performances for the autumn season, even though they have paid for the rights to perform.

“It feels like they’re waiting to see what professional stuff they’ll get in, and then fit us around them.”