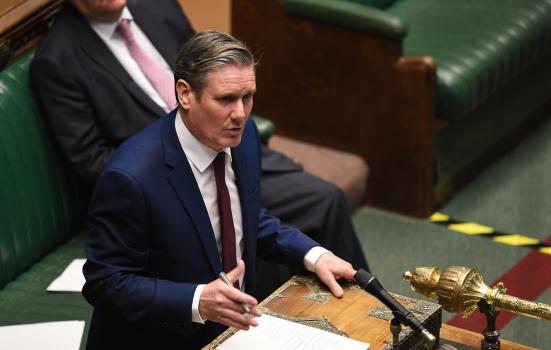 Keir Starmer says he will get an EU touring deal if elected
Photo:

The UK's creative sector must "speak out" in defence of public broadcasting, Keir Starmer has urged.

Speaking at Creative Coalition Festival 2022 on Wednesday evening (February 2), the Labour Leader said plans to privatise Channel 4 and cut funding from the BBC "are a direct attack on some of the best of Britain's creative work".

"Yesterday, the Secretary of State announced £50m of investment for the creative industries. But the privatisation of Channel 4 would put £2.1bn of gross value added to the supply chain at risk over the next 10 years. It risks putting 60 UK production companies out of business."

A commercialised BBC would mean the loss of a "valuable cultural export," Starmer claimed.

"I want to challenge all of you... to be bold, to come together and assert your collective clout by speaking out in defence of the value of public sector broadcasting against the Government’s attacks," he said.

With repeated references to the creative industries' economic value, Starmer sought to present Labour as an ally to the sector, but could not commit to any increase in regular funding for National Portfolio Organisations and the like.

"What I would say is judge us on our track record," Starmer said.

Funding to Arts Council England increased every year of the last Labour Government with the exception of 2007/08, when grant-in-aid fell by £4,000.

It was the sole policy specific to the cultural sector he mentioned - others include day-one work rights for employees and education reform.

A potential touring agreement would include allowances for cabotage, carnets and custom rules, Starmer said.

However, he was unable to explain how he would secure such deals when the current Government has largely failed to do so.

"I don't think it's good enough [for the Government] to simply say, 'well, you'll have to lump it; we're out of the EU now.'

"There's no country in Europe that doesn't want our creatives to be there."

Starmer acknowledged the importance of creative subjects to addressing critical skills shortages, not only in the creative industries.

"The Government’s squeeze on creative subjects in curriculums is self-harming.

"Even STEM industries say that the stripping away of vital creative subjects including drama, music and art is costing them."

He said he plans to introduce digital skills as a core school subject alongside reading, writing and arthimetic.