One study found fewer aerosol particles "were produced when playing than when breathing alone". 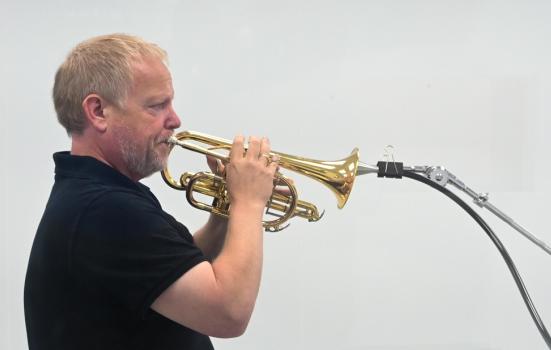 New research into the potential for coronavirus tramission via brass and wind instruments has offered "conclusive results" that the relatively low risk can be managed.

The authors of the study by Brass Bands England (BBE) say their findings should guide considerations about "changing policy to allow the resumption of some activites by the Government".

BBE found that using a bell cover screen on the end of instruments can "drastically reduce" the number of potentially-infectious aerosols released.

What's more, the results of the study - which are yet to be peer reviewed - showed that "observably fewer particles were produced when playing than when breathing alone".

While both aerosols and larger droplet particles were produced when playing, the type of brass instrument did not make a significant difference.

"The likelihood is that the individual player makes more difference than the choice of instrument," the research says.

Study Author Dr. Alex Parker told ArtsProfessional that he has discussed the findings with DCMS' Chief Scientific Officer and continues to work with the department's policy team in hope the Government might reassess its ban on amatuer brass and wind music.

BBE's study, which has also been passed on to the World Health Organisation, is being used to inform other studies being commissioned by DCMS. The findings are "in line with some other studies they [DCMS] have available to them," Parker said.

Bands and orchestras worldwide are leading the way with experimental studies into the level of risk posed by instruments, with another project by the Vienna Philharmonic finding next to no risk of transmitting coronavirus in an orchestral setting.

The Vienna Philharmonic's research found the aersosol release from brass instruments was "close to nothing," according to Fritz Sterz, a professor at the Vienna Medical University.

Speaking to Wired, Sterz, an expert in performing arts medicine, said his experiment found musicians released droplets through their nose and mouth at a range of 50 centimetres, but nearly none through the instruments themselves.

The flute was found to be the most dangerous instrument in Sterz's study - it had an aerosol range of 75 centimetres - but all instruments were safe within the Philharmonic's normal seating arrangements.

The results of this study were passed on to the Austrian Chancellor in May, leading the Government to announce shortly thereafter that orchestras could play to audiences of fewer than 100 people.

Separate German studies into the risk of coronavirus transmission through singing have produced mixed results.

One study from Bundeswehr University Munich said the risk was "very limited" because "air is only set in motion within half a meter in front of the mouth, regardless of volume and pitch".

However, another study conducted by Berlin's Charité university hospital said there is too little scientific study on the topic to date and recommended precautionary measures including face coverings, keeping a three-metre distance and only allowing two people in the room during lessons.

No money for ventilation

BBE's study follows a report from SAGE, the Government's scientific advisory group for emergencies, that said ventilation is key to reducing the risk of transmitting Covid-19, more so than social distancing.

A spokesperson said: "When considering applying to the Culture Recovery Fund, organisations must follow the Government guidance available at the time."

"Ventilation is a specialist area, and while the Arts Council cannot offer advice on what is possible in each venue, it is most likely that ‘improving ventilation’ in buildings would require capital works and therefore be ineligible".