In real terms, institutions sponsored by DCMS have increased their income by over a quarter in the past decade, despite a 19% reduction in direct funding. 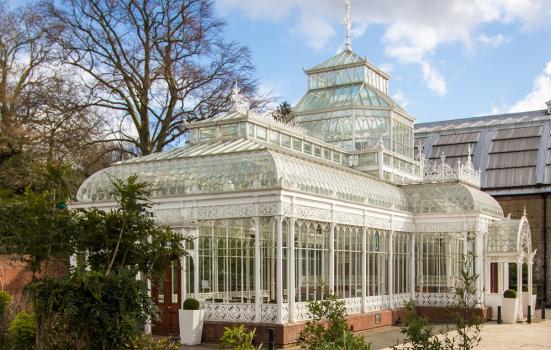 The conservatory at London's Horniman Museum - one of the institutions funded by DCMS
Photo:

Grants from central government form a much smaller proportion of the income of national cultural institutions than they did ten years ago, government figures reveal.

The trend is down to an ongoing squeeze on DCMS grant-in-aid alongside large increases in income from other sources such as ticket sales and commercial activities, suggesting that a decade of austerity has contributed to a significant shift in cultural business models.

Meanwhile, the proportion of income generated by the institutions themselves – through fundraising, tickets, commercial activities and other means – rose from 57% to 73%. 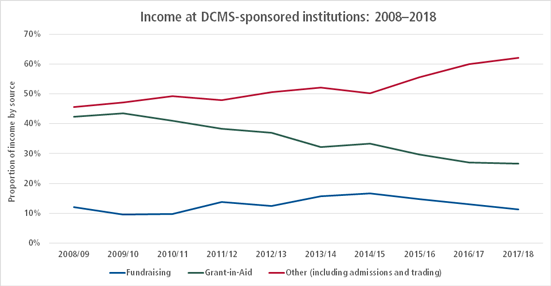 The figures include money granted to national museums as well as other institutions including the British Film Institute, Arts Council England’s (ACE) regularly funded organisations, and ACE itself.

But income from ‘other’ sources – which includes admissions and trading income, as well as money generated in other ways such as investment – has more than doubled overall since 2008, from £11.5bn to £23.1bn – equating to 74% growth in real terms.

This means that the overall proportion of the institutions’ income coming from these ‘other’ sources has risen from 46% to 62% since 2008.

The third major category of income – fundraising – has fallen slightly as a proportion of overall income, from 12% in 2008/9, to 11% in 2017/18. Fundraising income can fluctuate significantly year on year, because it is dependent on the timing of major campaigns as well as large object donations.

Looking at all sources combined, overall income at DCMS-sponsored institutions rose by 48% (£1.2bn) in the past decade, equating to a real-terms increase of 28% (£709m).

Drop in grant-in-aid for NPOs

Income from ‘other’ sources at ACE’s National Portfolio Organisations has also increased massively, from £714m to £1.6bn – meaning it has grown by 95% in real terms.

An ACE spokesperson said that this was down to a variety of factors, including the beginning of the use of lottery money to support portfolio activity from 2012/13 onwards (around £69m of lottery funding was used in this way in 2017/18). ACE added that the introduction of Major Partner Museums into its cohort of regularly funded organisations from 2012 onwards "has significantly changed the profile of the portfolio".

ACE also stated that the data "isn't really comparable year on year" due to changes to the makeup of its cohort of regularly funded organisations, and the organisations themselves, over time.

Like directly-funded institutions, NPOs have experienced a fall in grant-in-aid: the overall amount has dropped by more than a quarter (27%) in real terms over the past decade. 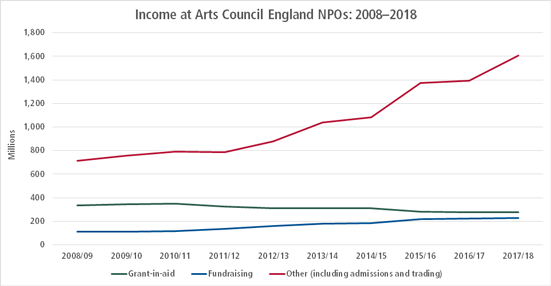 DCMS also provides details of the income sources of ACE itself. According to the DCMS figures, ACE's own grant-in-aid has bucked the general trend. The organisation has received a boost in grant-in-aid from £104m to £184m - a real-terms increase of more than 50% - since 2008. ACE said this was because the funder has taken on additional duties and requirements.

According to the figures, the Arts Council’s income from ‘other’ sources has also risen sharply, more than doubling from £156m to £313m – a real terms increase of 73%. But the Arts Council said these numbers were "incorrect", because of "inconsistencies with the way DCMS has presented these figures".

"We are going to be taking this up with DCMS to ensure the data is being presented correctly and consistently in future," said a spokesperson.

According to the disputed DCMS figures, ACE's income has risen by 90% over the past decade, or 64% in real terms. Its income, which was £497m last year, is presented as growing faster than any of the other cultural organisations receiving DCMS grant-in-aid.