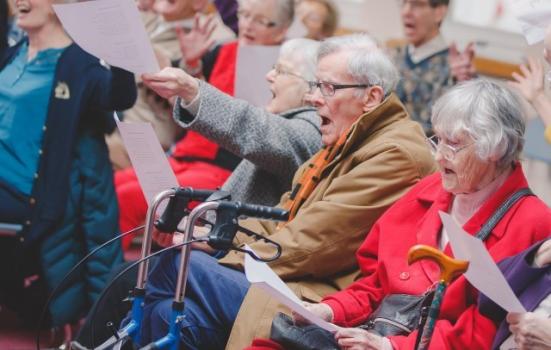 The guide, based on experiences from dementia friendly performances staged at WYP, Curve theatre and the Millennium Forum, aims to increase access to “life-enhancing shows” for people with dementia by reconnecting them to their local cultural venues and their communities.

It builds on the experience gained through WYP’s dementia friendly performance of ‘White Christmas’ in 2014, and the resulting model which won awards from both the Alzheimer’s Society and the National Dementia Care Awards. Since then, the venue has staged two more dementia friendly matinee performances.

The guide provides practical advice about which shows to adapt, how to adapt them, how to organise and think about the new audience, and what language to use when selling the shows. In addition, it lists the benefits of staging dementia friendly performances:

It also lists potential costs of staging such a show, such as the need for a member of staff to lead on the dementia friendly agenda; the allocation of extra hours to technical, front of house and performing staff; and the cost of providing travel and refreshments for audiences.

The guide goes on to give specific advice for each of the key themes. When writing and talking about dementia, it suggests using the phrase ‘living with dementia’ rather than ‘dementia sufferer’. For audiences, it suggests remembering that some people living with dementia need constant support, and others prefer to be left to their own devices.

The guide advises venues to select a show with a plot that is not too convoluted, and in adapting the show, it suggests softening audio and lighting cues in such a way that keeps a show comfortable without compromising its artistic and technical integrity.

Nicky Taylor, the guide’s author, said: “A diagnosis often leads to a loss of confidence and isolation and by making theatres accessible we are able to tackle these issues and provide enriching, meaningful experiences that reconnect people to their communities.

Since initiating Dementia Friendly Performances, I have worked with and received enquiries from theatres across the UK, Ireland and internationally. West Yorkshire Playhouse’s guide addresses this demand by bringing together feedback from our consultations and perspectives from staff and creatives who are directly involved in the process of staging Dementia Friendly Performances, from front of house assistants, to lighting and sound designers and performers.”

West Yorkshire Playhouse Artistic Director James Brining added: “We’re incredibly proud to be publishing these findings and sharing best practice advice to encourage venues to adopt this model on a national scale and open up our theatres to people living with dementia.”