A new ‘Centre for Music’ on the current Museum of London site hopes to be the Tate Modern of music. 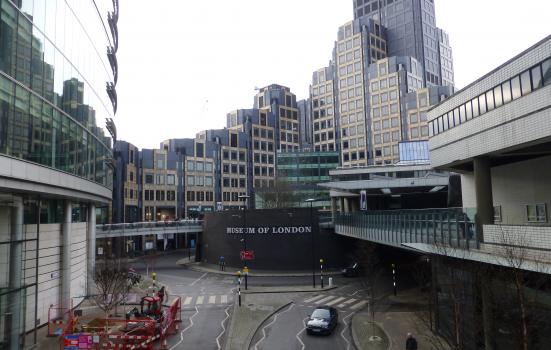 The Government is supporting plans for a new £278m ‘Centre for Music’ on the current Museum of London site, making £5.5m available via Arts Council England to fund a detailed business plan. The announcement comes as the initial feasibility study into the project, commissioned by the Chancellor of the Exchequer and the Mayor of London in February, is published.

The new centre, which could open in September 2023, aims to have “the same transformative effect on public engagement with music that Tate Modern brought about for contemporary art”. It will deliver “world-class acoustics” and have “education and accessibility at its core”.

The project marks a collaboration between the London Symphony Orchestra (LSO), the Guildhall School of Music & Drama and the Barbican Centre and ties in with the City of London Corporation’s plan for a ‘Cultural Hub’ in the area, responding to the arrival of Crossrail in 2018/19.

The building will house a 1,900-seat auditorium, a 200-seat performance space, learning and participation facilities, rehearsal studios, and facilities for broadcast and digital content creation, as well as entertaining and restaurant spaces. It will provide a new home for the LSO, as well as a venue for guest orchestras and the BBC Symphony Orchestra. If the proposed plans are taken forward, the Barbican Hall will be redeveloped as a home for contemporary music and LSO St Luke’s will be adapted to enhance its community focused and digital recording facilities.

The three organisations have outlined a vision for a Centre that will build on their longstanding partnership. In their foreword, the three leading figures, Sir Nicholas Kenyon, Kathryn McDowell CBE and Professor Barry Ife CBE, write: “We feel we have a unique opportunity to make this vision reality: the coming together of London’s need, a compelling idea, audience demand, new transport links, the arrival in autumn 2017 of Sir Simon Rattle as Music Director of the LSO and Artist-in-Association at the Barbican Centre and Guildhall School, and the potential availability of an ideal site in the City of London’s Cultural Hub – all these combine to make the moment unmissable.”

The Barbican Centre, LSO and Guildhall School were jointly commissioned to consider the case for a new state-of-the-art Centre for Music in the City of London, following comments made by Sir Simon Rattle in February. “You have no idea how wonderful an orchestra like the London Symphony Orchestra can sound in a great concert hall,” the conductor said, leading to speculation that a new concert hall may tempt him to return to the UK from his post with the Berlin Philharmonic. Rattle has since accepted the position of Music Director at the LSO from autumn 2017, but while the study says his appointment has “given urgency and focus” to the project, it asserts that a new Centre for Music “has been under consideration for a number of years”.

The feasibility study considered rebuilding the Barbican Hall and looked at the possibility of building a new venue in a number of locations, concluding that a new centre with a concert hall and education facilities on the current site of the Museum of London was the best option. The site, which is owned by the City of London Corporation and would be contributed as part of its support for the project, will become available when the Museum expands into a new location in West Smithfield. The study proposes removing the existing building to make way for a landmark development and redeveloping the streets around the site to ensure accessibility.

The capital cost of the new venue is estimated at £278m – the highest of all the options considered in the study. However the proposal is also expected to deliver the highest overall economic benefit: a net present value of over £890m to the UK economy. A major private fundraising campaign with a target of £125m is expected to be initiated with the next phase of the project.

The annual revenue cost for the Centre is expected to be £5.6m per annum. “This is low in comparison to the operating costs of comparable organisations,” the report authors admit, but allowed for by an operating model that has income generation at its heart and “substantial synergies” with the Barbican Centre which will minimise operational costs.

This figure will soothe the fears of some in the sector, who indicated in an initial stakeholder consultation that the centre “would be a net consumer of public subsidy”. According to the study, many responses to the consultation, which was commissioned by Arts Council England and conducted by Bonnar Keenlyside, were positive and supportive of the need for a new world-class venue. But concerns were also raised that “the proposed location could perpetuate perceptions of elitism and imbalance tilted towards London”.

The next phase of the project, which is expected to take 18 months, will see the completion of a Full Business Case, the agreement of the terms for the acquisition and development of the site, further development of the design concept, and initiation of the fundraising plan.