The local authority has approved an investment of over £30m for a scheme that will place arts activity at the heart of regeneration plans. 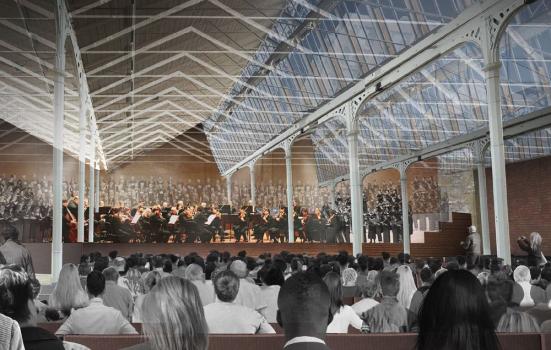 The Royal Borough of Greenwich has committed £31m to bring a number of landmark historic buildings back into use as part of a new creative district in Woolwich, south east London.

A section of the Royal Arsenal riverfront site will be transformed into a 16,500 sq m creative hub, which will be a key driver for the local economy and the continued regeneration of Woolwich and the surrounding area.

The arsenal, which was formerly the site of munitions manufacture for Great Britain, includes an old ammunitions factory, Building 41. This will become a large-scale performance venue, seating 1,200 in a conventional concert format and up to 2,200 standing. The nature of Building 41’s size and roof structure mean it will have a high-quality acoustic for classical and acoustic music, including large symphony orchestras with choirs.

Other venues will include:

There will also be office space for resident companies, which will include Academy Performing Arts, Chickenshed Theatre, Dash Arts, Greenwich Dance, the Greenwich+Docklands International Festival, Protein Dance, and the Royal Greenwich Heritage Trust.

Arts Council England has committed £270,000 to the scheme through its Cultural Destinations programme.

Leader of the Royal Borough of Greenwich Councillor Denise Hyland said: “The site’s potential has long been identified in the London Plan, so rather than spend money on simply maintaining these amazing listed buildings, we want them to work for Woolwich in the same way the Greenwich Town Centre riverfront buildings draw people there.

This will cement Woolwich as a destination in its own right; with a direct Crossrail link, it will give even more reason for visitors to flock to the town.”

The district could be complemented by the creation of a new national centre for experiential arts in Woolwich, plans for which were included in the London’s Mayor proposal for transforming the Thames Estuary.