Birmingham City Council decided a proposed 30% cut would have been too “damaging”, but says there is still an urgent need to find new sources of revenue. 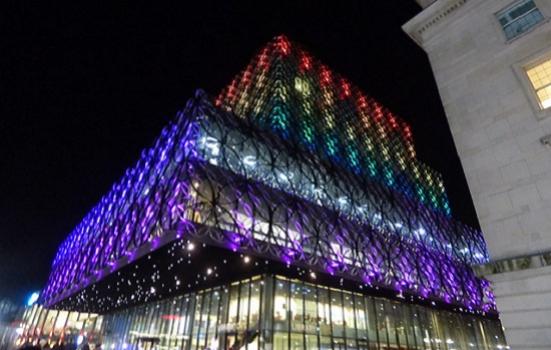 Birmingham Library lit up in celebration of Birmingham 2022. Planned funding cuts to local arts organisations have been reduced to support the Commonwealth Games cultural programme.
Photo:

A proposal to slash funding for Birmingham arts organisations by 30% has been scaled back slightly because it would be too “damaging” as the Commonwealth Games approaches.

Birmingham City Council has approved £2.67m in funding over the next four years to provide 10 organisations, including the Birmingham Royal Ballet, City of Birmingham Symphony Orchestra and Midlands Arts Centre, with “some stability and enable them to move forward with planning their future programmes, including any aligned to supporting the Commonwealth Games 2022”.

The new arts budget represents a £0.5m reduction in funding – a 23% cut for most organisations.

The decision followed public consultation and campaigning by the affected organisations, which were facing a third major cut to their council funding in four years.

Steve Ball, Director of Birmingham cultural sector advocacy partnership Culture Central, said the reduced cuts suggested its lobbying had worked, but added that the decision was indicative of the council’s “precarious financial situation”.

“There’s still some frustration around the extent to which the council isn’t fully recognising the economic and cultural impact of arts organisations in the city.”

The council considered allocating less of the arts budget to staffing costs and more to activity, but decided it would likely “seriously impede the council’s ability to undertake the necessary oversight of its investments”, according to a report approved by its cabinet.

It also thought about commissioning different companies or activities. However, large cuts to the budget in recent years – 25% in 2016/17 and another 34% in 2017/18 – meant it was “difficult enough to sustain the existing portfolio”.

Culture Central, which formed in 2016, worked with the council and other partners to develop the Birmingham Cultural Investment Inquiry. This proposed new approaches to finance and identified opportunities for collaboration on ticket sales, volunteering schemes and procurement and marketing.

The report said: “Whilst some notable progress has been made in delivering some of the recommendations, more work is needed.

“Some organisations have been very successful in increasing income from other sources, although generally not at the speed or scale that could replace lost City Council resources.”

A statement from Councillor Jayne Francis said Birmingham’s arts organisations must share costs and boost their income given the “continuing cuts to the public sector”. But she said it was “only right” that the council continue to support those organisations, whose work would form a key part of the Birmingham 2022 cultural programme.

A council spokesperson said the programme is being led by the Games Organising Committee.

Conservative Councillor Ewan Mackey said the council needed to place greater emphasis on long-term investment so organisations stay in Birmingham, and in infrastructure like car parking facilities so locals can access the arts.

“A lot more protection could have been given to the arts if the council had wanted to do so,” he said.

“The Commonwealth Games are coming and it’s a great opportunity to showcase the arts – but we need to make sure they are in a fit and healthy state to do that.”

Ball said local arts organisations were focusing on creating changes that last beyond the Games.

“We are very mindful of the importance of the legacy of the Games. We’re already talking among ourselves … to make sure that the Commonwealth Games isn’t the only investment in arts and culture in the city over the next three to four years.

“The arts sector needs to create a relationship with council that isn’t just with them as a funder. That’s dominated conversations in recent years, and I think we need to be [casting] a much wider net.”