Lottery funding decisions should be made at sub-national level argues a new report making the case for a radical re-think of arts funding distribution in England. 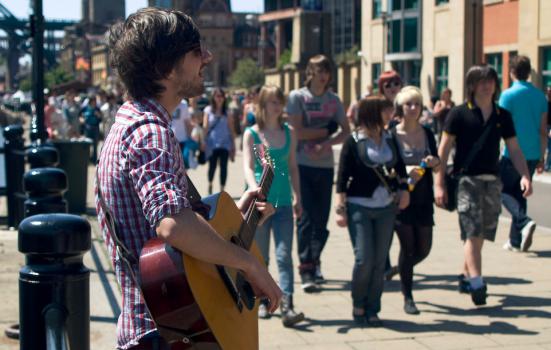 Moves by Arts Council England (ACE) to rebalance cultural funding across England are only “a token in the face of the scale of the challenge,” according to a new report, ‘The Next Steps? – a contribution to debate on a new national policy for the arts and culture in England’.

The report sets out data showing the continuing scale of funding imbalance between London and the rest of England, noting that the five percentage point increase in Lottery funding promised by ACE to the regions by 2018, announced by CEO Darren Henley in his inaugural speech, amounts to only 25p per head. The benefit to Londoners from funding of national cultural institutions, including ACE’s national portfolio organisations, currently stands at £65.18 per head, compared with £4.91 per head to the population based outside the capital.

Publication of the report, which is authored by GPS Culture – the team behind the 2014 report that prompted a re-think at Arts Council England on regional distribution of arts funding – has been timed to coincide with the DCMS consultation on its forthcoming White Paper on culture. The authors make the case for “fundamental change” in the distribution of arts funding, driven by the separation of Treasury and Lottery funding for the arts.

Redressing current funding imbalances, they say, should be partly done at national level by the DCMS and its arms-length bodies, with more Treasury resources allocated to “great regional centres… to work with their international and metropolitan peers as equal”.

Lottery funding, however, should be ring-fenced for “supporting and enhancing individual and community wellbeing in the local ‘places’ where we live our daily lives,” especially to “communities and individuals facing the greatest challenges”. England’s regions, they argue, require different cultural programmes and if the cultural, economic and social objectives for the arts are to be achieved, then “deep local as well as specialist knowledge will be required to design funding programmes and make decisions on allocations between and within them”. As a result, Lottery programmes and funding decisions, they say, should be located “below the national level” through a devolved structure, and they call for a commitment in the White Paper to exploring models of devolution for arts lottery funding for implementation after 2018.

Writing in ArtsProfessional, the authors said: “If we want an holistic and balanced national cultural policy and funding settlement, designed to deliver both excellence in cultural production, presentation and training, and equity in access to opportunities for participation and learning locally, then we have to fight for it – and the time to do that is now.”

They continued: “It need not be another fifty years until the next White Paper on Culture but this is our opportunity to set the bar high for this one in the particular circumstances of 2016, to challenge it to embed some tough and enduring principles into its new policy framework for England’s arts and culture, and to make some substantial structural interventions to change the status quo for the better.”

There's a lot that's important about The Next Steps? but what's particularly remarkable to me is the way in which it quietly but consistently recognises that the arts are delivered not just by large organisations but by medium sized, small and micro ones, as well as individual artists. As an independent producer based in the North East of England this feels as relevant to me as it would if I were leading a national institution and that's pretty unusual.