England’s rural arts leaders have serious concerns about the future of their organisations and are calling for more support – whether through Arts Council funding, partnerships with city-based venues or organisational development schemes. 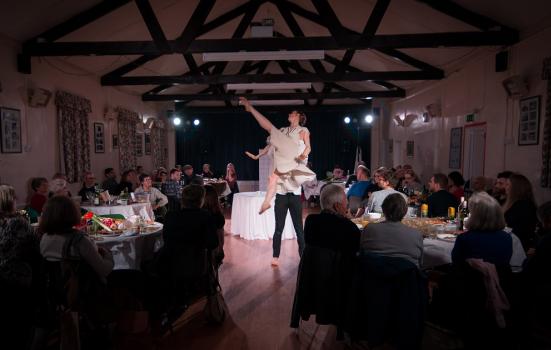 In Arts Council England’s (ACE) recent Rural Evidence and Data Review, one statistic stood out. Of the £1.6bn which ACE is providing to its National Portfolio Organisations (NPOs) from 2018 to 2022, less than 3% (£40.1m) is going to rural areas – despite 18% of England’s population living in these parts of the country.

Other findings from the report have further drawn attention to the serious concerns about the future harboured by many working in rural arts. The review confirmed that rural areas have suffered more than cities from local authority spending cuts. Between 2010 and 2017, councils covering mainly rural areas cut spending on arts and culture by 32.7%, compared to a 25.4% cut by councils in predominantly urban areas.

Raising income from philanthropy, sponsorship and trusts is also acknowledged to be harder for rural organisations: the data in the report on ‘contributed income’, defined as “a combination of one-off and regular donations, fundraising, sponsorship and trust income”, supports this. In 2016/17, urban NPOs received 13.3% of their income in this way, whereas the proportion for rural NPOs was 11.4%.

Ralph Lister, Director of the Somerset-based NPO Take Art, believes that England’s rural arts infrastructure could disappear entirely within the next five years unless ACE takes steps to address the funding imbalance.

Take Art’s work includes rural touring, education, and arts and health projects – but its financial situation is becoming increasingly difficult. Lister says pay for core staff at the organisation has increased by 3.5% between 2011 and 2019, compared to inflation of around 20%. “Take Art core staff have, in effect, taken a significant real terms pay cut over the last 8 years”, he says.

He says that unless funding for rural NPOs increases, the situation could prove terminal for many rural arts organisations. “There is the real possibility of a triple whammy holing these organisations below the waterline leading the rural arts infrastructure, fragile as it already is, to disappear altogether,” says Lister. “The combination of smaller rural local authority arts budgets, lower levels of philanthropic giving and possibly standstill funding to rural based NPOs could spell disaster.”

A further frustration for Lister is that some of the largest rural arts organisations included in ACE’s figures are not focused specifically on rural communities: Glyndebourne, Yorkshire Sculpture Park and Snape Maltings, which include many city dwellers among their audiences, will receive a combined £17.4m from ACE from 2018 to 2022, accounting for more than 40% of rural NPO funding.

He would like to see ACE redress the balance in funding between urban and rural areas as it finalises its new ten-year strategy. “A modest tweak in their NPO funding levels for rural-based NPOs could result in a significant positive impact. An increase from approximately 2.5% to 5.0% would mean finding a further £40m out of the total budget and result in a 100% increase in rural funding – and thereby a massive increase in activity.”

Sophie Motley, Artistic Director of Pentabus, a touring theatre NPO in Shropshire, says rural arts doesn’t have a high profile: “There is a huge amount of work being done by organisations in rural spaces that isn’t necessarily noticed in the same way as it is in an urban space”.

Pentabus’s core activity involves commissioning work from experienced playwrights and theatre makers and touring it around village halls and community spaces. “It’s a maximum cast of four,” says Motley. “The cast is usually very up close and personal to the audience, who often aren’t familiar with theatre and its conventions”.

But the organisation is also experiencing financial pressure. Its NPO funding has been frozen for the past two rounds, and its local authority funding has been cut from its one-time level of about £20,000 to £1,000, “and every year we’re told that might go”.

Motley says that while ACE has made some headway in rebalancing funding away from London, this has usually been focused on regional cities rather than rural areas. She acknowledges that rural touring organisations – which only emerged in the 1970s – face a different situation to city-based arts venues. But ultimately, she agrees with Lister that “without an increase, some of our rural arts organisations are going to die off”.

Given the current funding environment, though, Motley says Pentabus’ focus is “very much on assuming that we’re not going to get an uplift from ACE and trying to work out how to find funding from alternative sources”. Pentabus has an ambitious target of fundraising more than £100k a year, but Motley says “it’s much harder to find high level donors and business support in rural areas.” There are less businesses in the vicinity, and it’s harder to attract sponsorship, given that performances are in small spaces and promotion often happens via word of mouth.

She also mentions the difficulty of finding grants from trusts and foundations – many of which have a specifically urban focus: “If you are based in a city, it’s much easier to find those small pots of funding, which often are what you need”.

Participating in ACE’s recent Catalyst Evolve scheme, which supported organisations to attract more private giving, has “built infrastructure into the organisation on how to raise additional funding”, says Motley.

Another solution she suggests is to make funding for city-based organisations dependent on collaborations with rural organisations in the surrounding area. Pentabus has worked with large studio theatres on co-productions that offered benefits to both parties: “We show them how to do it in terms of touring to rural areas. In turn, they give us studio space, put in towards the work and help the production gain a higher media profile.”

Max May, Director of Rural Arts in North Yorkshire, echoes the view that funders and others in the sector do not always a strong understanding of the issues facing rural communities. Poverty, for example, is by no means limited to cities. “Some of North Yorkshire is incredibly affluent, but there are pockets of real deprivation,” he says.

Equally, ACE’s new focus on ‘relevance’ in its draft strategy has significant potential for engaging rural audiences: “For a lot of the older people we work with, everyday creativity is much less threatening. If we advertise a free art workshop, people think ‘Oh, I’m not an artist’, but if we advertise a free craft workshop, they’re all there.”

May says he would like to see support from funders in overcoming the specific challenges facing rural arts organisations. “There are certain things that by being rurally based, we feel disconnected from,” he says. “If something’s happening in ‘the north’ and it’s in Manchester, that’s two hours away from me.”

“The evidence review outlines that it is more difficult to lever funds into a rural area and more expensive to reach people,” he adds. “I don’t feel that those issues are being discussed enough. Could we see some kind of scheme to try and combat those?”

Pointing to the success of ACE’s Catalyst and Elevate organisational development schemes, he says: “I think we’re probably not going to get anything that size on a purely rural scale. But could there be a development pot of funding so we can get to conferences, so we can buy in some strategic development? There are some things that it just costs us so much more to do. That puts us at risk of not doing them. And if you don’t do them, you don’t develop.”

He says the key questions are: “How can we develop the capacity of the NPOs in rural areas that already exist, and how can we be looking to support the development of rural arts organisations that aren’t in the portfolio yet”.

In his view it is securing support for this sustainable development, rather than outright funding amounts, that is the key issue: “I don’t want exactly 18% of NPO funding to go to rural arts organisations – that’s not what I think is important,” he says. “What I think is important is that all rural communities can access locally based, high quality arts opportunities”.