Almost half the shows in a touring film and theatre festival have been cancelled at short notice following lacklustre ticket sales and failures to secure public funding. 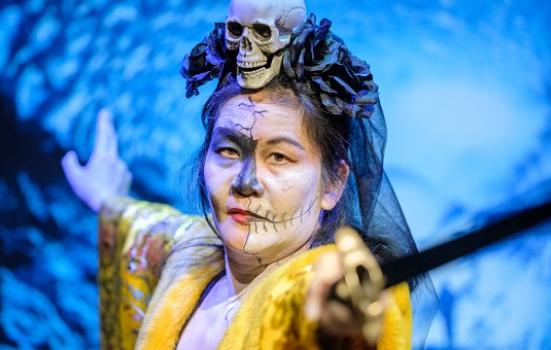 Michelle Wen Lee stars in "Monkey and the White Bone Demon", one of the cancelled Nomad Festival productions
Photo:

Pop-up venue the Rotunda Theatre told ticketholders and supporters this week that shows for its touring Nomad Festival, which were due to begin in London’s Greenwich on Friday, and in Newhaven in East Sussex from 20 June, will not go ahead.

Festival organiser Ross Ericson planned to provide about £5,000 against ticket returns to ensure the shows in Greenwich went ahead but withdrew his offer when it became clear that it would not be financially viable for two popular shows to be staged there.

The productions, ‘Tom Jones: History of a Foundling’ and ‘Monkey and the White Bone Demon’, would have been run by Red Dragonfly Productions, where Ericson is a Co-Director.

Ericson said the theatre company’s repeated applications to Arts Council England (ACE) for £14,000 funding had been rejected, leading it to cancel its Nomad Festival appearances.

He said a £6,000 advertising campaign for the festival, including a mail drop to 20,000 households in Greenwich and Blackheath, had little impact. He is likely to lose £4,000 on the Greenwich festival cancellation alone.

“We might as well have put our money into a bucket and set fire to it for all the good it did. Our website analytics showed virtually no response and the ticket sales were negligible – when it’s costing you £15 to sell a £12 ticket, then you know something isn’t working,” he said.

Ticketholders are being refunded or offered tickets to another festival location, he said.

Ericson claimed the festival would have gone ahead as planned if ACE had funded the Red Dragonfly shows.

It was “disappointing” and “infuriating” to be told only that other applications were preferred, he said.

Nomad Festival decided to press ahead without ACE’s financial support.

“We had already invested a large amount of money and assembled an extremely talented cast [who] we didn't want to let down. However, this meant the ticket sales had to be monitored carefully, on a location-by-location basis,” Ericson said.

“I was going to put in another £5,000 but, looking at the sales, it was likely I would have lost the lot and I don’t have a trust fund I can dip into.”

Sales remained lacklustre over the weekend and the call to cancel all 46 Greenwich and Newhaven performances was made on Sunday.

“We at the Rotunda Theatre are extremely sorry about this disappointing news,” an email from Ericson’s business partner Michelle Yim said.

The Nomad Festival debuted in Brockenhurst in April, and will move to Buxton Fringe in Derbyshire July.

Ericson said he and Yim invested nearly £30,000 in the Rotunda Theatre and Nomad Festival, not expecting an immediate financial return.

After successfully taking the Rotunda Theatre to Buxton Fringe in 2017 and 2018, they wanted to test the market in Brockenhurst, Greenwich and Newhaven this year.

But as an out-of-town organisation they found it difficult to establish a presence in the Greater London area.

“We will be going back to Brockenhurst next year but will not bother with the other two and look for new opportunities elsewhere until we find a model that works,” Ericson said.

“We hoped it would be more successful.”