The town is divided over plans for a joint arts centre and council headquarters as the bill rises to £53.7m. But without it, campaigners say local arts organisations could “cease to exist”. 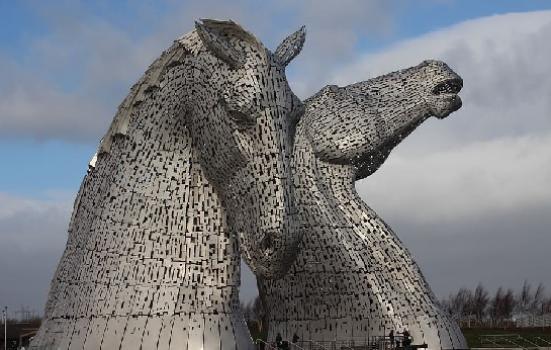 The Kelpies, a scultpure near Falkirk, Scotland.

Campaigners for a new arts centre in Falkirk are celebrating “a stay of execution” after their council voted to continue considering the project.

Councillors agreed last week to increase the budget for the combined arts centre and council headquarters from £45m to £53.7m but expressed concern about its affordability in the long term.

The building would include a 550-seat theatre, workshop spaces, the town library, a café, bar and Falkirk Council’s chambers and would be home to an amateur symphony orchestra, two opera societies, two choirs and several dance schools. These groups currently use Falkirk Town Hall, but many - including Falkirk Council - feel this building is increasingly unfit for purpose.

John Paterson, Vice-Chair of Falkirk and District Arts and Civic Council, which is petitioning for a new centre stressed its importance as the Town Hall nears the end of its life: “the fact is if the Town Hall were to close and not be replaced, the chances are all those organisations would cease to exist.”

Council documents note that local arts organisations have said they “may no longer be viable” if the Town Hall closes.

“There are no other venues in the area that come close to the prestige and facilities that Falkirk Town Hall has. Schools lack the flexibility required particularly for week-long runs and, at present, are too expensive to hire.

“They are adamant that a high-quality performing arts facility is critical for an area the size of Falkirk, both for their use and also for the reputation of the area.”

While the Town Hall has successfully generated more money in recent years, “it is compromised by its design, age and condition and lacks the stage capacity and ancillary spaces needed for a modern arts programme” and needs replacement, the documents note.

“Its capacity to sustain modern arts activities is reducing and at significant risk.”

Paterson said some local people were resistant to public spending on a new arts centre, but saw the value in replacing the Town Hall.

While Falkirk Council has decided to invite pitches from construction firms, the authority has not yet committed to a replacement arts centre. Paterson called the vote encouraging but was not confident the project will be approved, saying “it’s a stay of execution.”

Local politicians are split. Scottish National Party councillors are largely in favour of the new build, but Conservatives are concerned about the rising costs and Labour representatives are potentially “able to be persuaded one way or the other,” Paterson said.

Labour Councillor Joan Coombes said its value had to be weighed against the needs of village communities with potholed roads and non-existent bus services. The building is expected to cost the council £2.2m per year over the next 40 years.

“That’s not transforming the council; that’s catching the fast train to bankruptcy,” Coombes said, while voting to progress to the next stage.

Falkirk Council hopes the new arts and entertainment venue will rejuvenate its dying town centre, which several major retailers including Marks & Spencer have recently moved out of. The area experienced a sharp drop in employment (27.3%) and Scotland’s fastest reduction in shop numbers (15.2%) between 2008 and 2015.

The new facility, if constructed, is expected to grow the town’s income by increasing the number of tickets sold and staging larger-scale productions that the Town Hall cannot accommodate.