The effectiveness of a community dance programme in reducing falls among older people has been praised as “an example of ‘super social-prescribing’.” 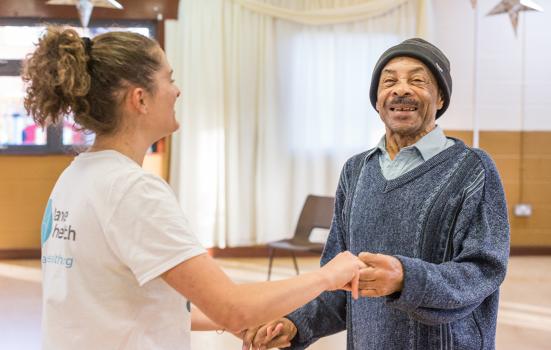 A pioneering dance programme has found a cost-effective way of reducing the number of falls among older people, according to new research by the Sport Injury Research Centre at Sheffield Hallam University.

Around one third of people aged over 65 and half of those over 80 fall at least once a year. But among those participating in the Dance to Health falls prevention programme, there was a 58% reduction in the number of falls.

The scheme also helped older people who are in danger of falling to overcome their lost confidence, reduced independence and increased isolation. Improved physical and mental wellbeing was also reported: the number of participants who said they felt full of energy all or most of the time doubled from 17% to 32%; 96% reported improved mental wellbeing; and 87% made friends.

Falls are a major challenge for the health system, costing the NHS £2.3 billion per year. Researchers estimate that a roll-out of the programme would have the potential to save the taxpayer almost £200m over a 2-year period. Of this, nearly £160m would be a cost saving for the NHS.

With the involvement of health partners and dance partners across England and Wales, 35 dance artists were trained to gain a standard falls prevention exercise qualification.

Each participant took part in a six-month initial ‘Improvement Programme’ followed by ongoing local groups. 40 programmes were delivered; and 17 ongoing, financially sustainable local groups that do not need funding have been established.

Dr Michael Dixon, Co-Chair of the Social Prescribing Network, said the local groups, with their explicit health focus, are “an example of ‘super social-prescribing’.”

The Dance to Health programme was Phase 1 of Aesop’s commitment to making Dance to Health available for all who need it. The model for growth over the next few years will be based on ‘social franchising’, to make the most of partner communities’ assets, including facilities, local people’s expertise and local funding.

Aesop’s CEO and founder Tim Joss is calling on community organisations, the NHS, local authorities, dance artists, arts organisations and people interested in volunteering to get involved with Phase 2.