The national online giving platform, which charges among the highest fees of all suppliers, has been propped up by a £125k grant that breaks through the official ceiling on grants from Arts Council England’s Grants for the Arts programme. 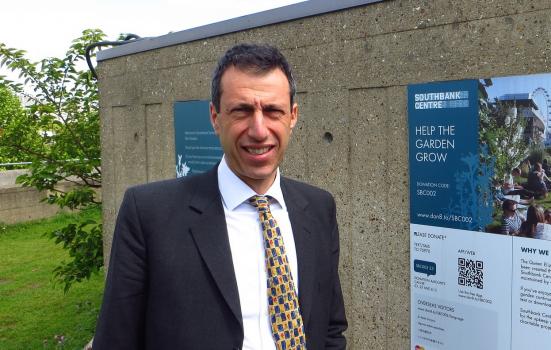 'William Makower of Donate' by Howard Lake is licensed under CC BY-SA 2.0

A digital giving platform for the arts which has been claiming to be “free for charities” is in fact charging fees amounting to almost half of the Gift Aid it collects on behalf of its clients. Despite its hefty fees, the National Funding Scheme (NFS) for the arts – otherwise known by its DONATE brand – has failed to achieve any of its financial targets and has relied on an exceptional grant from Arts Council England’s (ACE) Lottery-funded Grants for the Arts (GftA) programme to remain solvent. The majority of the publicly funded and charitable grants that have plugged the gap in the organisation’s trading income have been spent on services supplied by two private companies, both of which have NFS founder William Makower as their primary shareholder. Failing to generate sufficient clients in the arts sector, the NFS has now extended its services beyond the arts, to find the new business it needs to create a sustainable future.

Since 2014 the NFS has been stating that “donors can be reassured that the full value of their donation in these circumstances is being passed on to their chosen charity”, and that the NFS will take only “a minor share” of any eligible Gift Aid collected on an arts charity’s behalf. But that “minor” share is revealed in the small print to comprise 45% of the Gift Aid being recovered. According to NFS almost two-thirds (62%) of all the donations it processes are eligible for Gift Aid. It charges a 2.5% fee on donations that are ineligible.

Gift Aid is a government funded scheme that enables registered charities to claim 25p tax on each £1 donated by a UK taxpayer. Taking 45% of Gift Aid in fees makes the NFS one of the most expensive of all online giving sites available, many of which only charge a small one-off transaction fee to cover credit and debit card costs. A £100 donation with Gift Aid made through the NFS will net arts fundraisers just £113.75, compared with £124.85 from MyDonate and the full £125.00 from ‘Givey’. Similarly, the mobile giving site Just Text Giving is completely free of fees and charges. According to a price comparison site, only the service delivered by commercial provider GlobalGiving charges more than the NFS, returning £112.50 per £100 donated to the charities that use its services.

The NFS describes its unique advantage as being “the country’s only digital giving tool to combine SMS text giving, web app, QR and near-field Communication technology in a single platform”. It was first introduced by former Culture Secretary Jeremy Hunt in 2012, at a launch hosted by the DCMS, where he praised founder William Makower for his work developing digital giving in the arts and described him as “really trying to crack this problem for all of our benefit”. At that time, numerous digital platforms were already operating, including several charging minimal or zero fees. Nonetheless, the NFS applied for and was given charitable status, claiming that its digital platform would raise £6m for the arts in its first year, and a further £18m in year 2.

Such projections have proved fanciful. The total amount NFS had raised for charities by September 2014, the date of its most recent accounts, was £45.5k. Despite repeated assertions that the NFS would become self-sustaining by charging fees for its services, it generated just £2,596 in fees during this period. Instead, the development of NFS services has been supported almost entirely by a combination of public funding and grants from charitable trusts, worth a total of £538k. Nesta (£200k) and ACE (£160k) have provided the largest grants, with a number of foundations, including the Paul Hamlyn Foundation, the Garfield Weston Foundation and The Ruddock Foundation for the Arts also making contributions.

A trustee’s right to benefit

In January 2014 AP raised concerns – disputed by the NFS – over the relationship between the NFS and the commercial organisations it contracted to deliver the technical development of the scheme, Panlogic Ltd and Digital Information and Giving Ltd (DIG). AP revealed that, as well as being a trustee – and more recently acting as Chief Executive – of the NFS, Makower is a director and shareholder of both Panlogic and DIG, the latter of which counts Paul Ruddock, trustee of The Ruddock Foundation for the Arts, among its shareholders. 18 months later, these two companies have received more than £300k from the NFS, with Panlogic being paid £173.5k for “rent, marketing and staff time”, and DIG receiving £27.5k for hosting and maintenance, plus £100k for a “three-year software licence exclusively for the UK charitable arts/heritage sector”, although there is no evidence to suggest that this platform is used by anyone other than the NFS.

Charity Commission rules preclude trustees from providing a paid service to a charity, unless there is “an explicit authority in place before any decision conferring trustee benefit is made”. In the case of the NFS, this authority is granted due to the wording of the Memorandum and Articles of Association under which it was established. These state that a trustee’s company may be paid for its services if all the other trustees “unanimously agree to the payment”. A Charity Commission spokesperson explained to AP: “If the Memorandum and Articles of an organisation are accepted at the point of a charity’s registration, then these become the basis on which the charity can operate.”

Since its start-up period, other funders of the NFS have fallen away leaving ACE as its primary funder. In 2013 it granted nearly £100k from its Strategic Grant in Aid funds, for which no application process is required: grant recommendations are made by members of ACE staff and rubber-stamped by its area management teams. ACE gave this grant to the NFS on the basis that it was for a “pilot” project to develop a “new opportunity”. However, no evaluation was required at the end of the pilot, and ACE accepted an end-of-year report by the NFS as evidence of the value of the project.

By January 2014, the NFS was predicting “exponential growth in terms of the number of partners using the system, the number of causes being promoted and the money being raised” and approached ACE for further funding. Under Freedom of Information, AP has discovered that this request was handled personally by former Director of ACE London Moira Sinclair, who has since moved to become CEO of the Paul Hamlyn Foundation – another former funder of the NFS. Following a meeting with the then CEO of the NFS, Paul Cutts, she wrote to him saying: “I have not been able to identify any grant in aid funding to support the National Fundraising (sic) Scheme and I think it may be better for you to apply to us through the National Activities stream of our Grants for the Arts programme… We recognise that the scheme has taken time to set up and we would be very disappointed if it were not to have the support and opportunity to be thoroughly tested with the cultural sector, so a bid from you would be welcome.” The NFS was subsequently given leave to apply for £125k from the Lottery-funded scheme, breaching the published £100k ceiling on grants from this source. AP asked ACE for the criteria under which such a breach may be permitted and a spokesperson explained: “Areas may allocate grants of over £100k, but organisations must be given permission to apply beforehand”: its guidance on how to apply makes no mention of this.

The NFS subsequently submitted a final draft of its £125k GftA bid in April 2014, in which it predicted that by the end of 2015 at least 2,500 organisations would be using its platform regularly, at which point the organisation would become financially sustainable. At that time, the number of organisations registered with the scheme was less than 230, and only 49 had actually used the service for fundraising. With less than six months to go, the number of registered ‘partners’ has only grown to “over 350”. AP asked the NFS how many of these are using the service to actively fundraise, but at the point of publication had received no reply.

In its GftA funding application, the NFS described the activity for which it needed support as “core operational costs until the charity reaches self-sustainability at the end of 2015/beginning of 2016”. ACE rules state that “general running costs and ongoing overheads” are ineligible for GftA funding, and that if an “application is not eligible, this means that we cannot process it any further and it will not be considered for funding”. Despite this, and despite evidence that the company’s financial position was precarious – ACE’s assessing officer raised questions about the reliability of NFS growth forecasts – ACE went on to agree the grant. Cutts repeatedly urged ACE to hurry with its grant decision, saying “we have a pressing need for funding”, and the grant was finally paid in July 2014.

The business model laid out in its GftA application was based on the NFS charging a 4% commission fee on donations, with no joining/monthly fees. It claimed this represented “a lower percentage of donations than commercial platforms such as Just Giving” and said “our determination, when we reach scale, is to lower this”. But just a month after the GftA award was made, the NFS scrapped this fee structure, in favour of the new terms that are significantly less favourable for donations that attract Gift Aid.

This new pricing strategy has yet to prove itself. The organisation’s only notable fundraising success in the arts followed the fire at Battersea Arts Centre (BAC) in March this year. Over £76k has been raised for the ‘Save Battersea Arts Centre’ campaign through the NFS so far. 81% of donations to this appeal were eligible for Gift Aid, and the NFS agreed to cap its fees to ensure that most of the donations went to the centre. A BAC spokesperson explained to AP: “For Battersea Arts Centre’s Phoenix Fund they stopped the Gift Aid charge when it reached £2,000, and from that point on they only charged 3% on donations to cover their bank charges and admin fees.”

Also in March this year, William Makower made a formal request to ACE to “bring forward our retention tranche of £10k from January 2016” in order to ease the organisation’s “severe cash predicament” and enable them to “make a fresh application asap”. The revised budgets it presented to ACE show that, far from becoming self-sustaining by the end of 2015, as forecast in its Lottery application, the NFS needs a further £150k of funding in 2015, plus £100k in 2016. Makower and fellow board members have met with ACE Chair Sir Peter Bazalgette to discuss the organisation’s situation, and ACE is continuing to release Lottery payments to the NFS, but has turned down its request for early release of payments.

Since then, the NFS has been given special permission by the Charity Commission to work outside the arts sector and last week the NFS announced that it will now “provide its service to any organisation with a charitable purpose across all sectors in the UK”. Its fee structure has not changed, but it has removed all reference to being a “free” service to charities from its website.