A large-scale study has found that the growth of the festivals is benefiting the tourism and hospitality sectors. 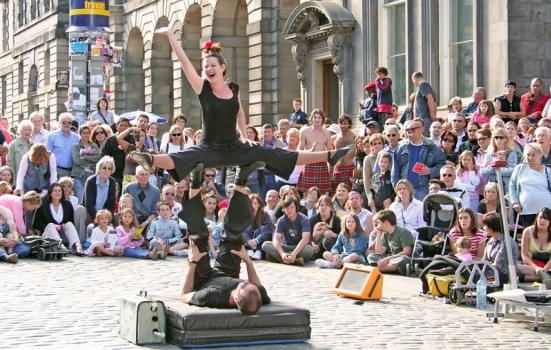 Edinburgh Blog via flickr.com (CC BY 2.0)

Edinburgh’s twelve festivals supported 6,000 jobs and generated £313m for the Scottish economy last year – 24% more than in 2010 – a new study has concluded.

Research by BOP Consulting, commissioned by Festivals Edinburgh, found that over 4.5 million people attended events at the festivals last year, including the Festival Fringe, Hogmanay and Imaginate.

It suggests the festivals are highly valued by residents, with nine out of ten local festivalgoers saying the festivals increased their pride in Edinburgh. 95% of all attenders were ‘satisfied’ with their experience and 68% said it had made them more likely to attend other cultural events.

The research, based on 30,000 audience responses, builds on a 2010 study. It analysed audience spend, including ticket sales, food and drink, travel and accommodation, as well as the festival organisers’ expenditure. The researchers took into account expenditure that would have likely occurred had the festivals not been happening.

Director of Research at BOP Consulting Richard Naylor said: “The scale of the 2015 Edinburgh Festivals Impact Study makes it one of the most statistically significant studies in the cultural world.”

On average, visitors spent £50 a day and stayed for four nights. Daily expenditure is slightly higher and the average number of nights slightly lower than in 2010.

The biggest beneficiaries of the festivals are companies in the tourism, hospitality, and leisure sectors. Just 19% of audience spend was on tickets, with accommodation, food and drink accounting for most of the rest.

£280m of the £313m generated was spent in Edinburgh. But compared with 2010, last year saw an increase in the number of nights festivalgoers spent elsewhere in Scotland, leading the researchers to conclude that the festivals are an effective tourism gateway.

Welcoming the findings, Edinburgh’s Festivals and Events Champion, Councillor Richard Lewis said: “The festivals have long been an important factor for the region and country’s economy and today’s findings reveal a staggering economic boost.”

He added: “The first of Edinburgh’s Festivals was set up in 1947 with the specific purpose of bringing people and cultures together. Over the decades, Edinburgh has built up an international reputation as an ambassador for the arts. Now more than ever, as political uncertainty in Europe continues, that principle must be maintained.”