Demand for emergency grants to support non-NPOs and individual artists through the Covid crisis could outstrip the funding available by up to £74m. 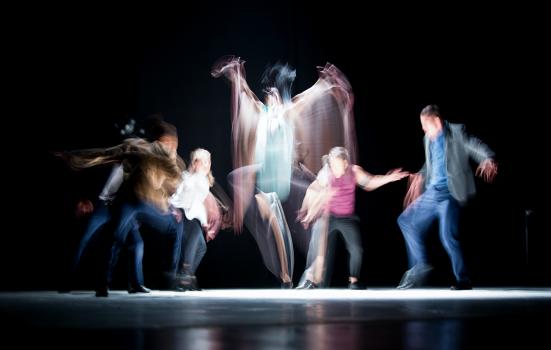 Arts Council England (ACE) received a total of 13,684 applications across the two rounds of its £70m emergency funding distribution for individual creative practitioners and organisations that are not among its National Portfolio Organisations (NPOs).

But the equal allocation of funding to the two rounds of the scheme has left applicants to the second round at a significant disadvantage.

£50m was earmarked for making grants of up to £35,000 for helping organisations “get back on their feet”, or to continue making work in the future that will contribute to ACE’s new 10-year strategy, Let’s Create. The fund was split equally between funding rounds, the first of which closed on 16th April and the second on 30th April.

ACE is still in the process of making decisions on round 2 grants and will be publishing the details of the actual value of applications and success rates at the end of the month. It will be disclosing the names and the amount awarded for organisations, but will be sharing only aggregated data for the individuals fund.

The figures published so far suggest that the funding available will be hugely oversubscribed. 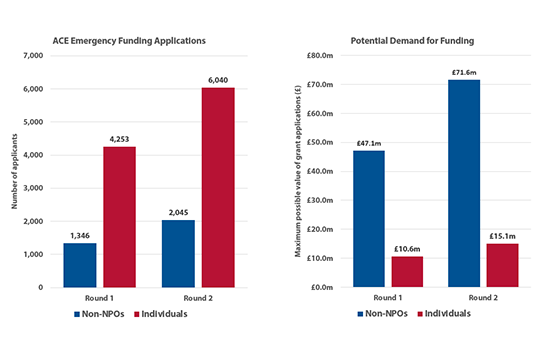 1,346 Non-NPO applications were made in the first round, but over half as many again, 2,045, applied to the second round, significantly reducing the odds that the later applicants will receive the awards they applied for.

If all Non-NPO applicants to round 1 had applied for the maximum possible award, the total value of applications to round 1 would have totalled £47.1m, which is £22.1m more than was available.

But if all Non-NPO applicants to round 2 have applied for the maximum possible award, that total will be £71.6m – almost three times the £25m available.

It was a similar picture for individual artists, who could apply for up to £2,500 from a £20m fund that was divided equally between the two funding rounds. 4,253 applied in round 1, but 6,040 applied in round 2.

If most creative practitioners had applied for the maximum £2,500 in round 1, all but £600k of grants could have been fulfilled. But if applicants have done this in round 2, there will be a £5m shortfall for these later applicants.

Artists and creatives stand on the brink of financial disaster following announcements that the Government’s Culture Recovery Fund will...