The institution has rejected campaigners’ claims that it has “done nothing” a year after promising to reassess its fundraising approach – but won’t make the review public. 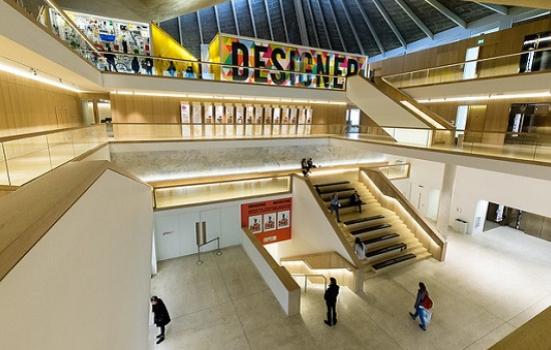 The Design Museum has come under fire for declining to release a review into its fundraising practices
Photo:

Artist campaigners have accused the Design Museum of a “lack of action” around a fundraising policy review it committed to one year ago.

The London museum says it undertook the review following controversy over hiring out its events space to arms trading company Leonardo in July 2018, when more than 40 artists asked for their work to be removed from an exhibition at the Design Museum because of its links to the company.

“The review took account of legislation governing charities, and learned from the best practices used by our peers and the guidance of professional bodies associated with the sector,” a statement from the institution said.

It says it is “confident that our corporate hire booking process is thorough and in line with best practice” and that not-for-profit organisations “must address the increased scrutiny which they rightly face” over how they generate income.

But the museum has ignored calls to make the review public, to the chagrin of campaigners.

“We are concerned that the museum’s silence means it has quietly dropped the matter, hoping that we will do the same. But we will not,” an open letter from 40 artists in the Nope to Arms Collective says.

“It is frustrating that the Design Museum appears to have decided not to communicate with us anymore, but we are determined to hold them accountable.”

Cultural organisations are facing increasing scrutiny of their business links and fundraising ethics. BP's sponsorship of major cultural organisations has played a part in two recent high-profile resignations, and in June Yana Peel resigned as Director of the Serpentine Galleries, blaming "toxic personal attacks" from protesters about reported links between the company owned by her and her husband and an Israeli cyberweapons firm.

However, the Design Museum told ArtsProfessional it was “satisfied” that it had made the results of the process publicly available in its annual review and said it would not provide any further information.

The brief section of the annual review covering the process says: “Following an event at the end of July the museum undertook a review of how and to whom the museum’s spaces could be hired. As a result of this the museum is satisfied that robust procedures for event hire bookings are in place and are consistent with those of our cultural venue peers.”

Nope to Arms campaigner Andrew Smith says the public has not seen “anything that goes beyond that short paragraph”.

There is no public information regarding the museum’s due diligence, ethics or fundraising policies, contrary to advice from the National Audit Office, the Museums’ Association and the Charity Commission. The commission says institutions’ fundraising practices should be “appropriately open to challenge by complainants”.

“It appears the conclusion the museum has reached is that there isn’t anything to change,” Smith says.

It is not clear whether the Design Museum is still accepting donations and event bookings from arms, oil and tobacco companies that campaigners want it to refuse.

“We undertook not to hire the museum to companies from certain sectors for the period of the review. Now this is complete, we will review this on a case-by-case basis,” its statement said.

The museum did not answer questions about whether it would undertake the same decision to host Leonardo following its review.

Financial records show venue hire is an important income earner for the museum, which has run an operating deficit since it moved to Kensington in west London in November 2016. In the 2017/18 financial year, more than 200 events generated £1.1m that support exhibitions and the museum’s work with young people and schools.

Nope to Arms said: “Anything less than a decision to rule out future funding from arms, oil and tobacco companies … would suggest that the museum is not willing to learn from its mistakes, or has calculated that it can take the money and run while avoiding further scrutiny.”

The Design Museum added that it does not believe the business interests of its Chair, Lord Mandelson, present a conflict of interest for its fundraising activities.

In 2014 Mandelson faced calls to resign his directorship of Russian defence conglomerate Sistema, a position he has since left. The same year the consultancy he chairs, Global Counsel, added oil company BP to its client list.

Campaigners fear Mandelson’s business connections mean he will defer to corporate interests amid ongoing scrutiny over the ethics of accepting their sponsorship.

Asked whether Mandelson was involved in the fundraising review process, the Design Museum said: “The review went through the usual process of committee and trustee meetings.”

Have only just caught up with this story. As regards DM's Chairman, Peter Mandelson, he has never declared any clients of his secretive consultancy Global Counsel on the House of Lords Register of Interests. It would be interesting to know if he has made them known to the other Museum trustees. House of Lords recently made a rule change which will allow him to sell his political services outside Parliament to anyone at all without revealing his clients (however evil).