A 1.7% increase in returns to the arts has been credited to a “nice run of luck” and a series of new initiatives by National Lottery operator Camelot. 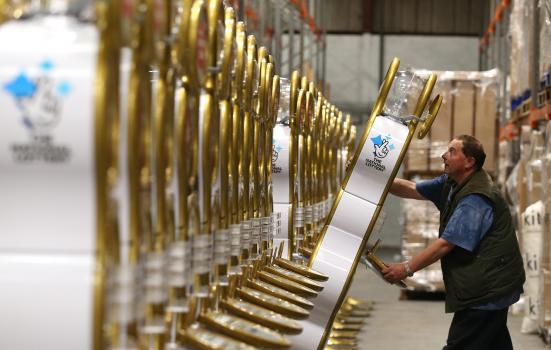 National Lottery operator Camelot has made the unexpected announcement that sales and returns to good causes were up slightly in 2017/18, despite early indications lottery funding for the arts would continue to slide.

But the upswing is not strong enough to return to the highs of 2015/16, when £380m in lottery funding was directed to the arts.

Explaining the latest developments, Camelot CEO Nigel Railton said: “It’s fair to say that sales benefited from a nice run of luck – particularly on EuroMillions with some incredible jackpots – but the strong foundations and new initiatives that we are putting in place have also started to play a part.”

When Camelot reported data for the first half of 2017/18, the situation looked much bleaker. Receipts suggested there would be a 4.7% fall in returns to good causes and a £6.4m cut in lottery funding to the UK’s arts councils and British Film Institute.

Speaking to a Public Accounts Committee inquiry last month, Railton said Camelot hoped changes to its games would raise between £60m and £80m more for good causes over the next two years, but didn’t foresee a return to the highs of recent years.

The strength of draw-based games such as EuroMillions has boded well for the arts as these return more to good causes than Scratchcards and online Instant Win Games.

When asked whether it was confident sales would hold or improve next year, Camelot told AP it does not make public sales predictions. But a spokesperson said it thinks it is “doing the right thing” by focusing on the areas highlighted in its recent strategic review.

Ordered in response to poor sales in 2016/17, this focused on improving the range of National Lottery games, investing in retail initiatives, upgrading the company’s digital capabilities, and re-invigorating the National Lottery brand.

Camelot’s license to operate the National Lottery will expire in 2023. A new license will be awarded in 2021, and a competition to select a new operator will begin in 2019.

Recent scrutiny by Parliament’s Public Accounts Committee, which investigated soaring shareholder profits at Camelot, concluded the license was “too favourable” and “not flexible enough to protect the interests of good causes as player behaviour changes”.