Cultural tourism yet to recover from Covid

There is optimism pre-pandemic interest will return, as sites retain high membership rates in a “really good start” to the new year. 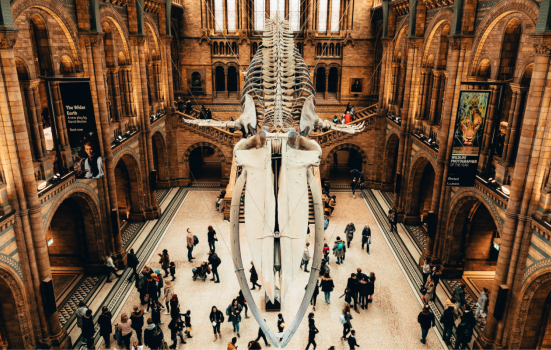 The Natural History Museum was ALVA's most visited indoor attraction in 2021
Photo:

The number of visitors to UK attractions remains far below pre-pandemic levels, but signs point to a full recovery in time.

Data from The Association of Leading Visitors Attractions (ALVA) released today (March 18) records 67.8 million visits to ALVA sites in 2021, a 25% increase on 2020.

“Some organisations, principally outdoors, are beyond survival stage and are in growth and thriving. Other organisations, particularly those heavily dependent on overseas visitors, are still in survival mode.”

Attractions that opened as soon as restrictions lifted have fared best. Sites that are primarily outdoors welcomed 17% fewer visitors in 2021 than two years prior, compared to indoor museums and galleries, which remain 73% down on their 2019 benchmark.

Donoghue told ArtsProfessional figures recorded over the February half-term showed most sites had a “really, really good start to the year”.

“The visitor figures and our membership retention rate are really good signs that we will get back to visitor numbers from 2019. It will take a while, but figures show how important visitor attractions and culture are to the British public.”

A separate ALVA study shows sites have retained high membership rates despite Covid-enforced periods of closure. 82% of memberships held over in the first year of Covid, and 86% in the second.

“These are extraordinary figures [which] tells me the British public really love going back to and caring about everything from theatres, to museums, to galleries, to heritage sites,” Donoghue added.

Visitors are slowest to return to London, figures indicate.

Donoghue says London was hit hard by the loss of its three principal markets – overseas tourism, domestic tourism, and its workforce – during the pandemic, and people are more likely to avoid crowded venues.

But public confidence to return to crowded areas is growing. ALVA’s partnership with Transport for London (TfL) shows a strong correlation between visitor figures and increasing use of buses and tubes.

London still boasts five of the UK’s top ten most visited attractions in ALVA’s data, and the top eight most visited indoor attractions, led by the Natural History Museum.

He suggests overturning the decision to make EU school and youth groups travel on passports rather than ID cards, reverting to tax free shopping, and continuing the reduction in VAT for accommodation and attractions for another financial year, to help tourism businesses repair their balance sheets.

Earlier this month, a parliamentary inquiry was warned tourism could face the equivalent of long Covid, with inbound tourist spending down 80% on pre-pandemic data.

“Overseas visitors to the UK are not likely to be back to pre-pandemic levels until 2024/25 so for many of our most iconic attractions this means not getting back to financial resilience for four or five years after having first closed their doors,” Donoghue added.